The Ammeter and the Voltmeter

An instrument used to measure currents is called an ammeter. To measure the current in a wire, you usually have to break or cut the wire and insert the ammeter so that the current to be measured passes through the meter.12, ammeter A is set up to measure current i.) It is essential that the resistance RA of the ammeter be very small compared to other resistances in the circuit. Otherwise, the very presence of the meter will change he current to be measured. A meter used to measure potential differences is called a voltmeter. To find the potential difference between any two points in the circuit, the voltmeter terminals are connected between those points, without breaking or cutting the wire.  voltmeter V is set up to measure the voltage across R I’)It is essential that the resistance Rv of a voltmeter be very large compared to the resistance of any circuit element across which the voltmeter is connected. Otherwise, the meter itself becomes an important circuit element and alters the potential difference that is to be measured.  Often a single meter is packaged so that, by means of a switch, it can be made to serve as either an ammeter or a voltmeter-and usually also as an ohmmeter, designed to measure the resistance of any element connected between its terminals. Such a versatile unit is called a multimeter.

In preceding sections we dealt only with circuits in which the currents did not vary with time. Here we begin a discussion of time-varying currents. 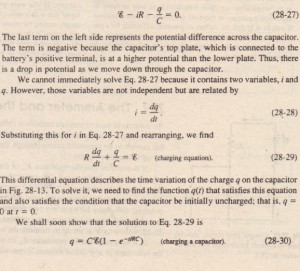 (Here e is the exponential base, 2.7 I 8 … , and not the elementary charge.) Note that Eq. 28-30 does indeed satisfy our required initial condition, because at t = 0 the term e-1IRC is unity; so the equation gives q = O. Note also that as t goes to  infinity (that is, a long time later), the term e-1IRC goes to zero; so the equation gives he proper value for the full (equilibrium) charge on the capacitor-namely, q = C~. A plot of q(t) for the charging process is given in Fig. 28-14a. The derivative of q(1) is the current i(t) charging the capacitor. 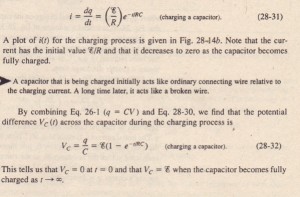 The product RC that appears in Eqs. 28-30, 28-31, and 28-32 has the dimensions of time (both because the argument of an exponential must be dimensionless and because, in fact, 1.0 n X 1.0 F = 1.0 s). RC is called the capacitive time constant of the circuit and is represented with the symbol T: 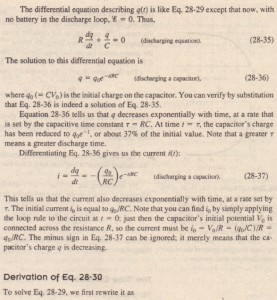 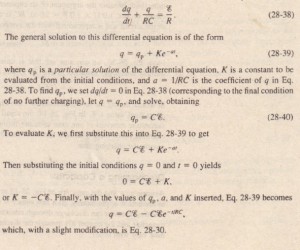