Gauss’s law is valid for any distribution of charges and for any closed law can be used in two ways. If we know the charge distribution, and symmetry to let us evaluate the integral in Gauss’s law, we can find !be – know the field, we can use Gauss’s law to find the charge distribution. on conducting surfaces. In this section we present examples of both kinds of applications. watch for the role played by the symmetry properties of each sy Gauss’s law to calculate the electric fields caused by several simple the results are collected in a table in the chapter summary. In practical problems we often encounter situations’ in which we . electric field caused by a charge distribution on a conductor. These by the following remarkable fact: When excess charge is placed on a and is at rest, it resides entirely on the surface, not in the interior of excess we mean charges other than the ions and free electrons that conductor.) Here’s the proof. We know from Section 22-6 that in an (charges at rest) the electric field E at every point in the interior material is zero. If E were not zero, the charges would move. Suppose Gaussian surface inside the conductor, such as surface A in Fig. 23-1- • everywhere on this surface, Gauss’s law requires that the net charge zero. Now imagine shrinking the surface like a collapsing balloon region so small that we may consider it as a point P; then the charge be zero. We can do this anywhere inside the conductor, so there can be at any point within a solid conductor; any excess charge must reside surface. (This result is .for a solid conductor. In the next section we’ll Colo happen if the conductor has cavities in its interior.) We will make use eloquently in the examples that follow.

The general technique used in this example can be applied to any spherically symmetric distribution of charge, whether it is
uniform or not Such charge distributions occur within many atoms and atomic nuclei, which is why Gauss’s law is a useful
tool in atomic and nuclear physics. 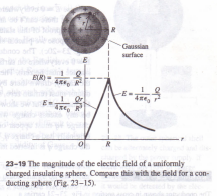