Atoms and the World Around Us

In the early years of the twentieth century many prominent scientists doubted the very existence of atoms. Today, however, every well-informed person believes that atoms exist and are the building blocks of the material world. Today, we can even  pick up individual atoms and move them around. That’s how the quantum corral on the opening pag~ of  ctapter 40 was fanned. You can easily count the 48 iron atoms that make up the circle in that image. We can even photograph single atoms by the light they emit. For example, the faint blue dot in  is due to light emitted by a single barium ion held in a trap at the University of Washington . 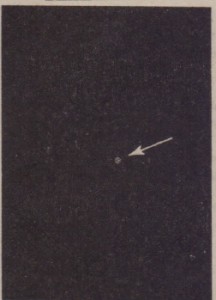