By the end of the 1920s the use of o-particles for bringing about nuclear disintegration had been studied intensively, and the need was felt for more powerful atomsmashing missiles. two research physicists at the Cavendish Laboratory, John Cockcroft and ErnestWalton, conceived the idea of accelerating protons in a powerful electric field and using these instead of e-particles to bombard atoms. Encouraged by Lord Rutherford, they set to work and, by 1932, had built the necessary apparatus.

The general scheme of the method they used is shown in Fig. 47.4. The electric field for accelerating the protons was produced by three metal tubes set up in line vertically inside an evacuated glass tube about 2 m long. By means of a special voltage quadrupling circuit consisting of diodes and capacitors fed from a step-up mains transformer, the upper tube was raised to a potential of 400000 V, the middle one to 200000 V, while the lower one was earthed. The original apparatus which is now in the Science Museum, London, is shown in Fig. 47.5.

One of Sir J. J. Thomson’s hydrogen discharge tubes was used as a proton source. Protons from it were injected into the upper tube, where they were accelerated by the powerful electric field between the tubes and finally emerged from the bottom with a velocity of about 8000 krn/s, Here they impinged on a plate made of lithium, where some managed to score direct hits on lithium nuclei, causing them to explode into two fragments.

These fragments, which were afterwards proved to be helium nuclei, revealed their presence by causing scintillations on a zinc sulphide screen. Cockcroft and Walton were convinced that the scintillations could not have been caused by protons which had merely bounced off the lithium, since these had insufficient energy to give them the necessary range and the scintillations were characteristic of IXparticles rather than protons.

Subsequently the disintegration products were passed into a cloud chamber. The tracks of the two helium nuclei were clearly visible, thus confirming the conclusion drawn from the original experiment. 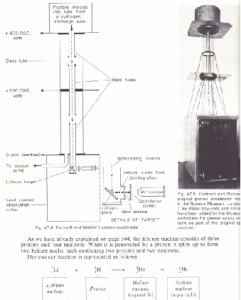