For the interference pattern to appear on viewing screen C in  the light waves reaching any point P on the screen must have a phase. difference that does not vary in time. That is the case in . because the waves passing through slits SI and S2 are portions of the s single light wave that illuminates the slits. Because the phase difference remains constant. the light from slits SI and S: is said to be completely coherent. Direct sunlight is partially coherent: that is. sunlight waves intercepted at two points have a constant phase difference only if the points are very close. If you look closely at your fingernail in bright sunlight, you can see a faint interference pattern called speckle that causes the nail to appear to be covered with specks. You see this effect because light waves scattering from very close points on the nail are sufficiently coherent to interfere with one another at your eye. The slits in a double-slit experiment, however, a re not close enough, and in direct sunlight, the light at the slits would be incoherent. To get coherent light, we would have to send the sunlight through a single slit as in Fig. 36-6; because that single slit is small, light that passes through it is coherent. In addition, the smallness of the slit causes the coherent light to spread via diffraction to illuminate both slits in the double-slit experiment. If we replace the double slits with two similar but independent monochromatic light sources, such as two fine incandescent wires, the phase difference between the waves emitted by the sources varies rapidly and randomly. (This occurs because the light is emitted by vast numbers of atoms in the wires, acting randomly and independently for extremely short times-of the order of nanoseconds.) As a result, at any given point on the viewing screen, the interference between the waves from the two sources varies rapidly and randomly between fully constructive and fully destructive. The eye (and most .common optical detectors) cannot follow such changes, and no interference pattern can be seen. The fringes disappear, and the screen is seen
as being uniformly illuminated. A laser differs from common light sources in that its atoms emit light in a cooperative manner, thereby making the light coherent. Moreover, the light is almost monochromatic, is emitted in a thin beam with little spreading, and can be focused to a width that almost matches the wavelength of the light. 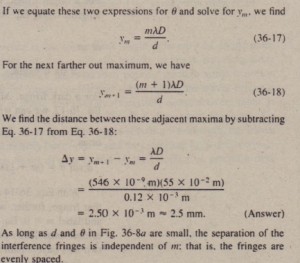