When two bodies collide, the impulses of one on the other determine the directions in which they then travel. In particular, when the collision is not head on the  bodies do’ not end up traveling along their initial axis. For such two dimensional collisions in a closed, isolated system, the total linear momentum must still be conserved.

Is often more useful for analyzing a two-dimensional collision if we write it in terms of components on Coordinate system. For example shows a glancing collision. 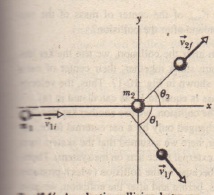 Contain seven variable  two masses three speeds,  and two angles. If we know any four of these  quantities, we can solve the three equations for the remaining three quantities.