Two identical sources of monochromatic waves, SI and S2′ are shown in Fig. 37-2a The two sources produce waves of the same amplitude and the same wavelength ,1,.In addition, the two sources are permanently in phase; they vibrate in unison. They might be two synchronized agitators in a ripple tank, two loudspeakers driven by the same amplifier, two radio antennas powered by the same transmitter, or two small holes or slits in an opaque screen, illuminated by the same monochromatic light source. We will see that if there were not a constant phase relationship between the two sources, the phenomena we are about to discuss would not occur. Two monochromatic sources of the same frequency and with any definite, constant phase relation (not necessarily in phase) are said to be coberent. We also use the term coherent waves (or, for light waves, coherent light) to refer to the waves emitted by two such sources.

If the waves emitted by the two sources are transverse, like electromagnetic waves, then we will also assume that the wave disturbances produced by both sources have the same polarization (that is, they lie along the same line). For example, the sources SI and S2 in Fig. 37-2a could be two radio antennas in the form of long rods oriented parallel to the z-axis (perpendicular to the plane of the figure); then at any point in the xy-plane the waves produced by both antennas have E fields with only a z-component, (We discussed such dipole antennas and the waves that they emit in Section 33-9.) Then we need only a single scalar function to describe each wave; this makes the analysis much easier.

We position the two sources of equal amplitude, equal wavelength, and (if the waves are transverse) the same polarization along the y-axis in Fig. 37-2a, equidistant from the origin. Consider a point a on the x-axis. From symmetry the two distances from SI to a and from S2 to a are equal; waves from the two sources thus require equal times to travel to a. Hence waves that leave SI and S2 in phase arrive at a in phase. The two waves add, and the total amplitude at a is twice the amplitude of each individual wave. This is true for any point on the x-axis.

Similarly, the distance from S2 to point b is exactly two wavelengths greater than the distance from SI to b. A wave crest from SI arrives at b exactly two cycles earlier than a crest emitted at the same time from S2′ and again the two waves arrive in phase. As at point a, the total amplitude is the sum of the amplitudes of the waves from S1 and S2′ In general, when waves from two or more sources arrive at a point in phase, the amplitude of the resultant wave is the sum of the amplitudes of the individual waves; the
individual waves reinforce each other. This is called constructive interference (Fig. 37-2b). Let the distance from S, to any point P be r1, and let the distance from S2 to P be r2• For constructive interference to occur at P, the path difference r2 – r1 for the two sources must be an integral multiple of the wavelength A:

Figure 37-3 shows the same situation as in Fig. 37-2a, but with red curves that denote all points on which constructive interference occurs. On each curve, the path difference r2 – r, is equal to an integer m times the wavelength, as in Eq. (37-1). These curves are called antinodal curves. They are directly analogous to antinodes in the standing-wave patterns described in Chapter 20 and Section 33-7. In a standing wave formed by interference between waves propagating in opposite directions, the antinodes
are points at which the amplitude is maximum; likewise, the wave amplitude in the situation of Fig. 37-3 is maximum along the antinodal curves. Not shown in Fig. 37-3 are the nodal curves, which are the curves denoting points on which destructive interference occurs in accordance with Eq. (37-2); these are analogous to the nodes in a standing wave pattern. A nodal curve lies between each two adjacent antinodal curves in Fig. 37-3; one such curve, corresponding to r2 – r, = -2.5A., passes through point c.

In some cases, such as two loudspeakers or two radio-transmitter antennas, the interference pattern is three-dimensional. Think of rotating the color curves of Fig. 37-3 around the y-axis; then maximum constructive interference occurs at all points on the
resulting surfaces of revolution.

CAUTION~ The interference patterns in Figs. 37-2a and 37-3 are not standing waves, though they have some similarities to the standing-wave patterns described in Chapter 20 and Section 33-7. In a standing wave, the interference is between two waves propagating in opposite directions; a stationary pattern of antinodes and nodes appears, and there is no net energy flow in either direction (the energy in the wave is left “standing”). In the situations shown in Figs. 37-2a and 37-3, there is likewise a stationary pattern of antinodal and nodal curves, but there is a net flow of energy outward from the two sources. From the energy standpoint, all that interference does is to “channel” the energy flow so that it is greatest along the antinodal curves and least along the nodal curves.

For Eqs. (37-1) and (37-2) to hold, the two sources must have the same wavelength and must always be in phase. These conditions are rather easy to satisfy for sound waves (see Example 20-7 in Section 20-6). But with light waves there is no practical way to achieve a constant phase relationship (coherence) with two independent sources. This is because of the way light is emitted. In ordinary light sources, atoms gain excess energy by thermal agitation or by impact with accelerated electrons. An atom that is “excited” in such a way begins to radiate energy and continues until it has lost all the energy it can, typically in a time of the order of 10-8 s. The many atoms in a source ordinarily radiate in an synchronized and random phase relationship, and the light that is emitted from two such sources has no definite phase relation.

However, the light from a single source can be split so that parts of it emerge from two or more regions of space, forming two or more secondary sources. Then any random phase change in the source affects these secondary sources equally and does not change their relative phase. The distinguishing feature of light from a laser is that the emission of light from many atoms is synchronized in frequency and phase. As a result, the random phase changes mentioned above occur much less frequently. Definite phase relations are preserved over correspondingly much greater lengths in the beam, and laser light is much more coherent than ordinary light. 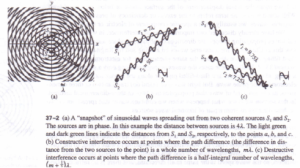