Crossed Fields: Discovery of the Electron

Both an electric field  E and a magnetic field Ii can produce a force on a charged particle. When the two fields are  perpendicular to each other, they are said to be crossed fields. Here we shall examine what happens to charged  articles-  -namely.e>electrons-as they move through crossed fields. We use as our example the   experiment that led to the discovery of the electron in 1897 by J. J. Thomson at Cambridge University.shows a model, simplified version of Thomson’s experimental apparatus-a cathode ray tube (which is like the picture tube in a standard television. 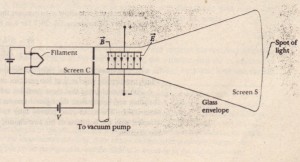 set). Charged particles (which we now know as electrons) are emitted by a hot filament at the rear of the evacuated  tube and are accelerated by an applied potential difference V. After they pass through a slit in screen C, they form a narrow beam. They then pass through a region of crossed E and 8fields, headed toward a fluorescent screen S, where they produce a spot of light (on a television screen the spots part of the picture). The forces on the charged particles in the crossed-fields region can deflect them from the center of the screen. By controlling the magnitudes and directions of the fields, Thomson could thus control where the spot of light appeared on screen. Recall that the force on a negatively charged particle due to an electric film.dis directed opposite the field. Thus, for the particular ~Id arrangement of, electrons are forced up the page by the electric field £ and down the page by geomagnetic field 8; that is, the forces are in opposition. Thomson’s procedure was o the following series of steps.

2. Turn on E and measure the resulting beam deflection.

3. Maintaining E, now turn on 8and adjust its value until the beam returns to the . undetected position. (With the forces in opposition, they can be made to cancel.) We discussed the deflection of a charged particle moving through an electric  E between two plates (step 2 here) in Sample Problem 23-4. We found that the deflection of the particle at the far end of the plates is