What is the structure of matter on the smallest scale? This question has always . intrigued physicists. One way of getting at the answer is to allow an energetic charged particle (a proton, for example) to slam into a solid target. Better yet, allow two such energetic protons to collide head-on. Then analyze the debris from many such collisions to learn the nature of the subatomic particles of matter. The Nobel Prizes in physics for 1976 and 1984 were awarded for just such studies.  How can we give a proton enough kinetic energy for such an experiment?The direct approach is to allow the proton to “fall” through a potential difference V, thereby increasing its kinetic energy by eV. As we want higher and higher energies, however, it becomes more and more difficult to establish the necessary potential difference.A better way is to arrange for the proton to circulate in a magnetic field, and to give it a modest electrical “kick” once per revolution. For example, if a  proton circulates 100 times in a magnetic field and receives an energy boost of100 keV every time it completes an orbit, it will end up with a kinetic energy of (100)(100 keV) or 10 MeV. Two very useful accelerating devices are based on this principle. 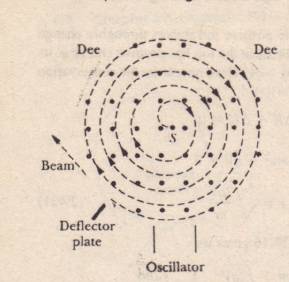