in cross section, a cylindrical capacitor of length L formed by two coaxial cylinders of radii a and b. We ‘assume that L ~ b so that we can neglect the fringing of the electric field that occurs at the ends of the cylinders.  each plate contains a charge of magnitude q.

As a Gaussian surface, we choose a cylinder of length L and radius 1′, closed by end caps and placed as is shown in  Equation 26-4 then yields .

We see that the capacitance of a cylindrical capacitor, like that of a parallel-plate capacitor. depends only on geometrical factors, in this case L, b, and a. 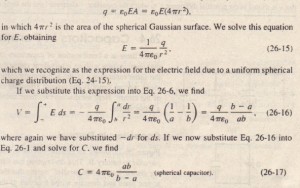 Capacitors in Parauel and in Series

parallel to battery B. This description has little to do with how the capacitor plates are drawn. Rather, “in parallel” means that the capacitors are directly wired together  .at one plate and directly wired together at the other plate, and that a potential difference V is applied across the two groups of wired-together plates. Thus, each capacitor has the same potential difference V. which produces charge on the capacitor. the applied potential V is maintained by the battery.) In general

When we analyze a circuit of capacitors in parallel, we can simplify it with this mental replacemen tCapacitors connected in parallel can be replaced with an equivalent capacitor that has the same total charge q and the same potential difference V as the actual capacitors. 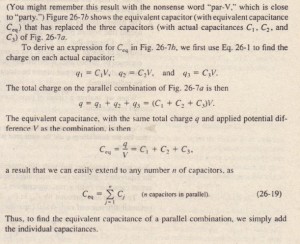 1.can move along only one route, such as from capacitor 3 to capacitor 2 in  . If there are additional routes, the capacitors are not in series. An example is given in Sample Problem 26-2.

2. The battery directly produces charges on only the two plates to which it is connected (the bottom plate of capacitor 3 and the top plate of capacitor I in  Charges that are produced on the other plates are due merely to the shifting of charge already there. For example in  the part of the circuit enclosed by dashed lines is electrically isolated from the rest of the circuit. Thus, the net charge of that part cannot be changed by the battery-its charge can only be redistributed.

When we analyze a circuit of capacitors in series, we can simplify it with this mental replacement: 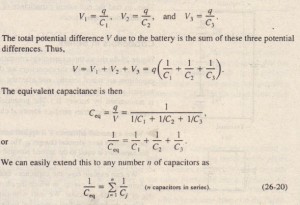 Using Eq. 26-20 you can show that the equivalent of a series of capacitances is always less than the least capacitance in the series.