At the Kitt Peak National Observatory in ‘Arizona, Vera Rubin and her co-worker Kent Ford measured the rotational rates of a number of distant galaxies. They did so by measuring the Doppler shifts of bright clusters of stars located within each galaxy at various distances from the galactic center. As shows, their results were surprising: The orbital speed of stars at the outer visible edge of the galaxy is about the same as that of stars close to the galactic center. As the solid curve inFig. 45-6 attests, that is not what we would expect to find if all the mass of the galaxy were represented by visible light. Nor is the pattern found by Rubin and Ford what we find in the solar system. For example, the orbital speed of Pluto (the planet most distant from the Sun) is only about one-tenth that of Mercury (the planet closest to the Sun).  The only explanation for the findings of Rubin and Ford that is consistent   ithNewtonian mechanics is that a typical galaxy contains much more matter than what e c n actually see. In fact, the visible portion of a galaxy represents only about 5 to 10% of the total mass of the galaxy. In addition to these studies of galactic rotation, many other observations lead to the conclusion that the universe abounds in matter that we cannot see .: What then is this dark matter that permeates and surrounds a typical galaxy like a gigantic halo whose diameter is perhaps 30 times the diameter of the visible’ galaxy? Dark matter candidates fall into two classes, whimsically called WIMPs  (weakly interacting massive particles) and MACHOs (massive compact halo objects).If neutrinos have mass, they are possible WIMP candidates. MACHOs can include objects such as black holes, white dwarf stars, and brown dwarf stars; the latter are Jupiter-size objects that are not massive enough to become actual stars, which shine (and hence are visible) because of fusion. As of 2000, there is convincing evidence that MACHOs do indeed exist in our  own galaxy. Assume that an (invisible) MACHO in our galaxy passes, by chance.between Earth and a star of a nearby galaxy. Einstein, in his general theory of relativity, predicted that light rays passing near any massive object will be deflected by the mass of that object (see Section 14-9). Thus, if star, MACHO, and Earth are aligned, the MACHO will act as a  gravitational lens. focusing the light rays from the star that pass near it and causing the image of the star to brighten while the MACHO is eclipsing it. Enough such events have been observed to  convince astronomers that MACHOs can account for a substantial fraction (some say 50%) of the dark matter in our  own galaxy. Observations are ongoing. 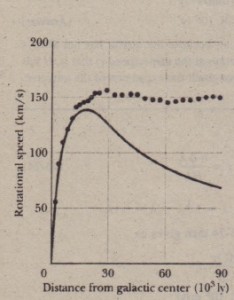 In 1985, a physicist remarked at a scientific meeting:
It is as certain that the universe started with a Big Bang about 15 billion years ago as it is that the Earth goes around the Sun. This strong statement suggests the level of confidence in which the Dig bang theory, first advanced by Belgian physicist Georges Lemaitre, is held by those who  study these matters.You must not imagine that the big bang was like the explosion of some gigantic firecracker and that, in principle at least, you could have stood to one side and watched. There was no “one.side” because the big bang represents the beginning of spacetime itself. From the point of view of our present universe, there is no position in space to which you can point and say, “The big bang happened there.” It happened  everywhere.Moreover, there was no “before the big bang,” because time began with that creation event. In this context, the word “before” loses its meaning. We can, however, conjecture about what went on during succeeding intervals of time after the big bang.

t = 10-43 s. This is the earliest time at which we can say anything meaningful about the development of the universe. It is at this moment that the concepts of space and time come to .have their present meanings and the laws of physics as we know them become applicable. At this instant, the entire universe is much smaller than a proton and its temperature is about 1032 K.

t = 10-34 S. By this moment the universe has undergone a tremendously rapid inflation, increasing in size by a factor of about 1030. It has become a hot soup of photons, quarks, and leptons, at a temperature of about 1027K

t = 10-4 s. Quarks can now combine to form protons and· neutrons and their antiparticles. The universe has now cooled to such an extent by continued (but much slower) expansion that photons lack the energy needed to break up these new particles. Particles of matter and antimatter collide and annihilate. each other. There is a slight excess of matter, which, failing to find annihilation partners, survives to form the world of matter that we know today.

t =. 1min. The universe has now cooled enough so that protons and neutrons, in colliding, can stick together to form the low-mass nuclei 2H, 3He, 4He, and 7Li. The predicted relative abundances of these nuclides are just what we observe in the universe today. There is plenty of radiation present, but light cannon travel far before it interacts with a nucleus. Thus the universe is opaque.

t = 300000 y. The temperature has now fallen to about 104 K. and electrons can stick to bare nuclei when they collide, forming atoms. Because light does not interact appreciably with (uncharged) particles such as neutral atoms, the light is now free to travel great distances. This radiation forms the cosmic background radiation discussed in Section 45-12. Atoms of hydrogen and helium, under the influence of gravity, begin to clump together, starting the formation. of galaxies and stars.

clusters of galaxies, and superclusters of galactic clusters. There are also vast voids  in which there is relatively little matter, and there are regions so crowded with matter that they are called walls. If the big bang theory of the beginning of the universe is  even approximately correct, the seeds for this nonuniform distribution of matter must have been in place before the universe was 300 000 y old and now should show up as a n uniform distribution of the microwave background radiation. In 1992, measurements made by NASA’s Cosmic Background Explorer  (COB E) satellite revealed that the background radiation is, in fact, not perfectly uniform. The image shown on this chapter’s opening page was made from those measure ends and shows us the universe when it was only 300 000 Yold. As you can see, large-scale collecting of matter had already begun; thus, the big bang theory is, in principle, on the right track.