The Definition Of B

We determined the electric, field E at a point by putting a test particle of charge q at rest at th~t point and measuring the electric force FE acting on the particle. W~ then defined E as

If a magnetic monopole were available, we could define Ii in a similar way. Because such piles have not been found. we must define Ii in another way. in terms of the magnetic force ~ exerted on a moving electrically charged test particle.
In principle, we do this by firing a charged pa  ticle through the point at which. Ii is to be defined, using various directions and speeds for the particle and determining the force F8 that-acts on the particle at that point. After many such trials we would find  when the particle’s velocity “is along a particular axis. thought he point, force F8 is zero. For all other directions of .the magnitude of FH is always  proportional to l’ sin C/>, where c/> is the angle J>between the zero-force axis and the direction of ;7. Furthermore, the direction of F 8 is always perpendicular to the direction

Finding 0f the Magnetic Force on a Particle

Equation 29-3 tells us that the magnitude of the force F8 acting on a particle in a magnetic field is proportional to the charge q and speed . of the particle. Thus. the force is equal to zero if the charge is zero or if the particle is stationary. Equation 29-3 also tells us that the magnitude of the force is zero if and B are either parallel (c/> = 0°) or  ntiparallel (c/> = 180°), and the force is at its maximum when v and E are perpendicular to each other. _  Equation 29-2 tells us all this plus the direction of FB• From Section 3-7,we know that the cross product v x E in Eq. 29-2 is a vector that is perpendicular to the two vectors v and E. The right-hand rule tells us that the thumb of the right hand points in the direction of v x E when the fingers sweep v int~ E. If q is positive. then (by Eq  29-2) the force F8 has the same sign as v x B and thus must be in the same direction: that is. for positive q, F8 is directed along the thumb  If q is negative, then the force Fs and cross product.

Ii X B have opposite signs and thus must be in opposite directions. For negative q, FB is directed opposite the thumb  Regardless of the sign of the charge, however,

The.force r, acting on a charged particle!; moving with velocity V through a magnetic field B is a/ways perpendicular to V and B. Thus, FB never has a component parallel to Ii.This means that FB cannot change the particle’s speed v (and thus it cannot change the particle’s kinetic energy). The force can change only the direction of v (and thus the  direction of travel); ‘Only  i  this sense can Fs accelerate the particle.To develop a feeling for Eq. 29-2, consider Fig. 29-3, which shows some tracks left by charged particles moving rapidly through a bubble chamber at the Lawrence Berkeley Laboratory. The chamber, which is filled with liquid hydrogen, is immersed in a strong uniform magnetic field that is directed out of the plane of the figure. An incoming gamma ray particle-which leaves no track because it is uncharged transforms into an electron (spiral track marked e-) and a position (track marked e +) while it knocks an electron out of a hydrogen atom (long track marked e “), Check with Eq. 29-2 and  that the three tracks made by these two negative  particles and one positive particle curve in the proper directions.The SI unit for B that follows from Eqs. 29-2 and 29-3 is the newton per  oulomb-meter per second. For convenience, this is called the tesla (T): 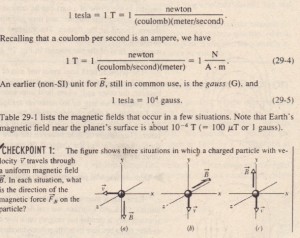