Diffraction by a Circular Aperture

Here we consider diffraction by a circular aperture- that is, a circular opening such as a circular lens, through which light .  shows the image of a distant point source of light (a star, for instance) formed on photographic film placed in the focal  of a converging lens. This image is not a point, as geometrical optics would suggest, but a circular disk surrounded by several progressively fainter secondary rings. Comparison with  leaves little doubt that we are dealing with a  diffraction phenomenon. Here, however, the aperture is a circle of diameter  d rather than a rectangular slit.The nalysis of such patterns is complex. It shows, however, that the first minimum for the diffraction pattern of a circular aperture of diameter d is located by 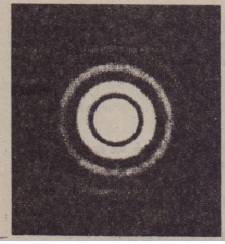