The Directions Of Currents

we drew the current arrows in the direction in which positively charged  particles would be forced to move through the loop by the electric field. Such positive charge carriers, as they are often called, would move av.cy from the positive battery terminal and toward the negative terminal. Actually, the charge carriers in the copper loop of lb are electrons and thus are negatively charged. The electric field forces them to move in the direction opposite the current arrows, from the negative terminal to the positive terminal. For historical reasons, however, we use the  following
convention: 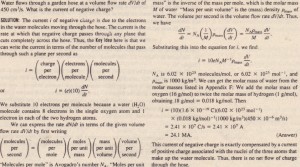