In the first years of the twentieth century not much was known about the structure f atoms beyond the fact that they contain electrons. The electron had been discovered (by J. J. Thomson) in 1897, and its mass was unknown in those early days.  Thus, it was not possible even to say how many negatively charged electrons a given atom contained. Atoms were electrically neutral so they must also contain some positive charge, but nobody knew what form this compensating positive charge took.  n 1911 Ernest Rutherford proposed that the positive charge of the atom is densely concentrated at the center o   the atom, forming its nucleus, and that, furthermore, he nucleus is responsible for most of the mass of the atom. Rutherford’s proposal was no mere conjecture but was based firmly on the results of an experiment  suggested by him and carried out by his collaborators, Hans Geiger (of Geigercounter fame) and Ernest Marsden, a 20-year-old student who had not yet earned  his bachelor’s degree.In Rutherford’s day it was known that certain elements, called radioactive, transform into other elements spontaneously, emitting particles in the process. One such element is radon, which emits alpha (a) particles with energies of about 5.5 MeV. We now know that these particles are the nuclei of atoms of helium.Rutherford’s idea was to direct energetic alpha particles at a thin target foil and  measure the extent to which they were deflected as they passed through the foil.Alpha particles, which are about 7300 times more massive than electrons, have a  charge of  shows the experimental arrangement of Geiger and Marsden. Their alpha source was a thin-walled glass tube of radon gas. The experiment involves counting the number of alpha particles that are deflected through various scattering angles cp. their results. Note especially that the vertical scale is logarithmic. We see that most of the particles are   scattered through rather small angles

but-and this was the big surprise-a very small fraction of them are scattered through very large angles, approaching 180°. In Rutherford’s words: “It was quite the most incredible event that ever happened to me in my life. It was almost as  incredible as if you had fired a 15-inch shell at a piece of tissue paper and it came back and hit you.”
Why was Rutherford so surprised? At the time of these experiments, most physicists believed in the so-called plum pudding model of the atom, which had been advanced by 1. J. Thomson. In this view the positive charge of the atom was thought to be spread out through the entire volume of the atom. The electrons (the “plums”) were thought to vibrate about fixed points within this sphere of positive charge (the “pudding”). The maximum deflecting force that could act on an alpha particle as it passed through such a large positive sphere of charge would be far too small to deflect the alpha particle by even as much as 1°. (The expected deflection has been compared to what you would observe if you fired a bullet through a  of snowballs.) The electrons in the atom would also have very little effect on the massive, energetic alpha particle. They would, in fact, be themselves strongly deflected, much as a swarm of gnats would be brushed aside by a stone thrown through them. Rutherford saw that, to deflect the alpha particle backward, there must be a large force; this force could be provided if the positive charge, instead of being spread throughout the atom, were concentrated tightly at its center. Then the incoming alpha particle could’ get very close to the positive charge  without penetrating it; such a close encounter would result in a large deflecting force.  possible paths taken by typical alpha particles as they pass through the atoms of the target foil. As we see, most are either undetected or only slightly deflected, but a few (those whose incoming paths pass, by chance, very close  to a nucleus) are deflected through large angles. From an analysis of the data, Rutherford concluded that the radius of the nucleus must be smaller than the radius of an atom by a factor of about \04• In other words, the atom is mostly empty space. 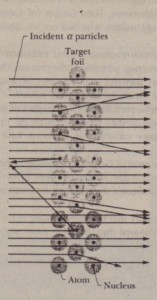 A 5.30 MeV alpha particle happens. by chance. to be headed directly toward the nucleus of an atom of gold. which contains 79 protons. How close does the alpha particle get to the center of the nucleus before it comes momentarily to rest and reverses its motion? Neglect the recoil of the relatively massive nucleus.

This is a small distance by atomic standards but not by nuclear standards. It is. in fact. considerably larger than the sum of the radii of the gold nucleus and the alpha particle. Thus, this alpha  particle reverses its motion without ever actually “touching the gold nucleus.

shows some properties of a few atomic nuclei. When we are interested primarily in their properties as specific nuclear species (rather than as parts of atoms), we call these particles nuclides.

Neutrons and protons, when considered collectively, are called nucleons, We represent nuclides with symbols such as those displayed in the first column of Table 43-1. Consider 197Au, for example. The superscript 197 is the mass number  A. The chemical symbol Au tells us that this element is gold, whose atomic number is 79. From EcJ,.43-\, the neutron number of this nuclide is \97 – 79. or 118. Nuclides with the same atomic number Z but different neutron numbers N are   called isotopes of each other. The element gold has 32 isotopes, ranging from 173Auto 204Au. Only one of them (197Au) is stable; the remaining 31 are radioactive. Such radionuclides undergo decay (or disintegration) by emitting a particle and thereby transforming to a different nuclide. 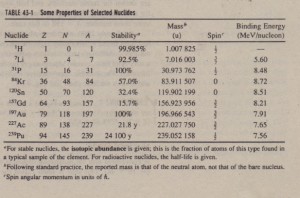 “For stable nuclides. the isotopic abundances given; this is the fraction of atoms of this type found in a typical sample of the element. For radioactive nuclides, the half-life is given. “Following standard practice, the reported mass is that of the neutral atom. not that of the bare nucleus. “Spin angular momentum in units of ft. 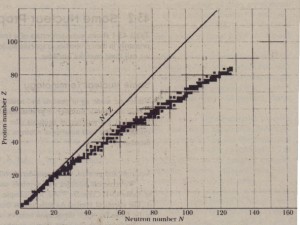 We organize the nuclides on a nuclidic chart like that in, in which a nuclide is represented by plotting its proton number against its neutron number. The stable nuclides in this figure are represented by the green, the radionuclides by the  yellow. As you can see, the radionuclides tend to lie on either side of-and at the upper end of-a well-defined band of stable nuclides. Note too that light stable nuclides tend to lie close to the line N = Z, which means that they have about the  same numbers of neutrons and protons. Heavier nuclides, however, tend to have many more neutrons than protons. As an example, we saw that 197 Au has I 18 neutrons and  only 79 protons, a neutron excess of 39. Nuclidic charts are available as wall charts, in which each small box on the chart is filled with data about the nuclide it represents. F shows a section of such a chart, centered on 197 Au. Relative abundances (usually, as found on Earth) are shown for stable nuclides, and half-lives (a measure of decay rate) are shown  .for radionuclides. The sloping line points out a line of isobars-nuclides of same mass number, A = 198 in this case.  As of early 2000, nuclides with atomic numbers as high as Z = 118 (A = 293)had been found in laboratory experiments (no elements with Z greater than 92 occur naturally). Although large nuclides generally should be highly unstable and last only a very brief time, certain supermassive nuclides are relatively stable, with fairly Ion lifetimes. These stable supermassive nuclides form an island of stability at high and Non a nuclidic chart like .

A convenient unit for measuring distances on the scale of nuclei is the femtometer (= 10-15 m). This unit is often called the fermi; the two names share the same. 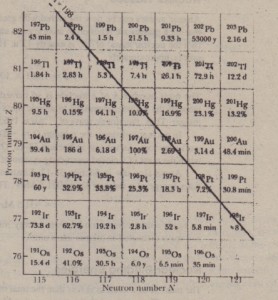 abbreviation. Thus,
I femtometer = I fenni = I fm = 10-15 m. (43-2) W  can learn about the size and structure of nuclei by bombarding them with a beam of high-energy electrons and observing how the nuclei deflect the incident electrons. The electrons must be energetic enough (at least 200 MeV) to have de Broglie wavelengths that are smaller than the nuclear structures they are to problem. The nucleus, like the atom, is not a solid object with a well-defined surface. Furthermore, although most nuclides are spherical, some are notably ellipsoidal. Never less, electron-scattering experiments (as well as experiments of other kinds) allow us to assign to each nuclide an effective radius given by   in which A is the mass number and “0 = 1.2 fm. We see that the volume of a nucleus,which is proportional to ,.3, is directly proportional to the mass number A and is  independent of the separate values of Z and N.Equation 43-3 does not apply to halo nuclides. which are neutron-rich nuclides that were first produced in laboratories in the 1980s. These nuclides are larger than  predicted by Eq. 43-3, because some of the neutrons form a halo around a spherical  core of the protons and the rest of the neutrons. Lithium isotopes give an example.When a neutron is added to 8Li to form 9Li, neither of which are halo nuclides, the effective radius increases by about 4%. However. when two neutrons are added to i to form the neutron-rich isotope IILi (the largest of the lithium isotopes), they
do not join that existing nucleus but instead form a halo around it, increasing the effective radius by about 30%. Apparently this halo configuration involves less energy  than a core containing all II nucleons. (In this chapter we shall generally assume that Eq. 43-3 applies.)

Atomic masses can be now measured with great precision. Recall from Section 1-6 that such masses are reported in atomic mass units u, chosen so that the atomic mass (not the nuclear mass) of 12C is exactly) 2 u. The relation of this unit to the SI mass unit is, approximately,

as a convenient conversion between energy measured in millions of electron-volts and mass measured in atomic mass units.

Caution: Binding energy is not an energy that resides in the nucleus. Rather, it is a difference in mass energy between a nucleus and its individual nucleons. If we were able to separate a nucleus into its nucleons. we would have to transfer a total  energy equal to 6£be to those particles during the separating process. Although wecannot actually tear apart a nucleus in this way, the nuclear binding energy is still a convenient measure of how well a nucleus is held together.  A better measure is the binding energy per nucleon 6£ben’ which is the ratioof the binding energy 6 Ebe of a nucleus to the number A of nucleons in that nucleus:

We can think of the binding energy per nucleon as the average energy needed to separate a nucleus into its individual nucleons.  is a plot of the binding energy per nucleon .£ben versus mass umber A for a large number of nuclei. Those high on the plot are very tightly bound; that is, we would have to supply a great amount of energy per nucleon to  break apart one of those nuclei. The nuclei that are lower on the plot, at the left andright sides, are less tightly bound, and less energy per nucleon would be required to  break them apart.These simple statements about  have profound consequences. The nucleons in a nucleus on the right side of the plot would be more tightly bound if that nucleus were to split into two nuclei that lie nea  the top of the plot. Such a process, called fission  occurs naturally with large (high mass number A) nuclei such as  uranium, which can undergo fission spontaneously (that is, without an external cause.