To derive the expression for the Doppler frequency shift for light, we have to use the special theory of relativity. We will discuss this in Chapter 39, but for now we quote the result without derivation. The wave speed is the speed of light, usually denoted by c, and it is the same for both source and receiver. In the frame of reference in which the receiver is at rest, the source is moving away from the receiver with velocity v. (If the source is approaching the receiver, v is negative.) The source frequency is again. The frequency fR measured by the receiver R (the frequency of arrival of the waves at the receiver) is then given by

A familiar application of the Doppler effect for radio waves is the radar dev . mounted on the side window of a police car to check other cars’ speeds. The el magnetic wave emitted by the’ device is reflected from a moving car, which acts moving source, and the wave reflected back to the device is Doppler-shifted in frequency. The transmitted and reflected signals are combined to produce beats, and the speed can be computed from the frequency of the beats. Similar techniques (“Doppler radar”) are used to measure wind velocities in the atmosphere.

The Doppler effect is also used to track satellites and other space vehicles. In Fig. 21-14 a satellite emits a radio signal with constant frequency Is’ As the satellite orbits past, it first approaches and then moves away from the receiver; the frequency IR of the signal received on earth changes from a value greater than/s to a value less than/s as the satellite passes overhead.

The Doppler effect for electromagnetic waves, including visible light, is important  in astronomy. Astronomers compare wavelengths of light from distant stars to those emitted by the same elements on earth. In a binary star system, in which two stars orbit about their common center of mass, the light is Doppler-shifted to higher frequencies when a star is moving toward an observer on earth and to lower frequencies when it’s moving away. Measurements of the frequency shifts reveal information about the orbits and masses of the stars that comprise the binary system.

Light from most galaxies is shifted toward the longer-wavelength or red end of the , an effect called the red shift. This is often described as a Doppler shift ring from motion of these galaxies away from us. But from the point of view of the theory of relativity it is something much more fundamental, associated with the ‘on of pace itself. The most distant galaxies have the greatest red shifts because light has shared in the expansion of the space through which it moved. Extrapolating this expansion backward to over ten billion years’ ago leads to the “big . From this point of view, the big bang was not an explosion in space but expansion of space itself. 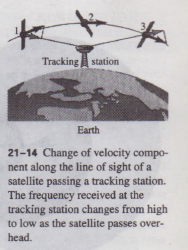