‘Fire are ·eIght baryons-the neutron and the -that have a spin quantum number of ]. Table 45-3 shows some of their other properties. ~4ashows the fascinating pattern that emerges if we plot the strangeness of these ba~.oris against their charge quantum number, using a sloping axis for the charge quantum numbers. Six of the eight form a hexagon with the two remaining baryons at Its center. Let us turn now from the hadrons called baryons to the hadrons called sons. Nine with a spin of zero are listed in Table 45-4. If we plot them on a sloping strangeness-charge diagram, as in  the same fascinating pattern emerges! These and re acted plots, called Way patterns,” were proposed independently in 1961 by Murray Gell-M~;m at the California Institute of Technology and by Yuval Ne’man at Imperial.College, London. The two patterns of  are  representative of a larger number of symmetrical patterns in which groups of baryons and mesons can be displayed. The symmetry of the Eightfold Way pattern for the spin-] baryons (not shown here) calls for fen particles arranged in a pattern like that of the tenpins in a bowling alley. However, when the pattern was first proposed, only nine such particles were known; the “headpin” was-missing. In 1962, guided by theory and the symmetry of the pattern, Gell-Mann made a prediction in which he essentially said: 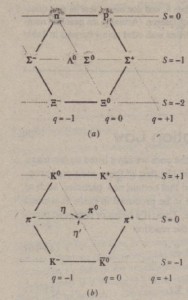 There exists a spin-] baryon with a charge of -I, a strangeness of – 3, and a rest energy of about 1680 MeV. If you look for this omega minus panicle (as I propose to  call it), I think you will find .it.A team of physicists headed by Nicholas Samios of the Brookhaven National Laboratory took up the challenge and found the “missing” particle, confirming all its  predicted properties. Nothing beats prompt experimental confirmation for building confidence in a theory! The Eightfold Way patterns bear the same relationship to particle physics that the periodic table does to chemistry. In each case, there is a pattern of organization.

•A borrowing from Eastern mysticism. The “Eight” refers to the eight quantum numbers (only a few of which we have defined here) [hat are involved in the symmetry-based theory that predicts the existence of the patterns.

in which vacancies (missing particles or missing elements) stick out like sore thumbs, guiding experimenters in their searches. In the case of the periodic table, its very existence strongly suggests that the atoms of the elements are not fundamental particles  but have an underlying structure. Similarly, the Eightfold Way patterns strongly suggest that the mesons and the baryons must have an underlying structure, in terms of which their properties can be understood. That structure can be explained in terms of the quark model, which we now discuss 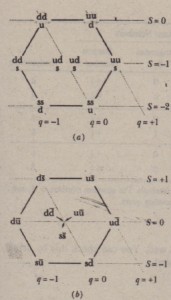