In 1915, well before the discovery of quantum physics, Albert Einstein and Dutch physicist W. J. de Haas carried out a clever experiment designed to show that the angular momentum and magnetic moment of individual atoms are coupled.  Einstein and de Haas suspended an iron cylinder from a thin timber, as shown in. A solenoid was placed around the cylinder but not touching it. Initially 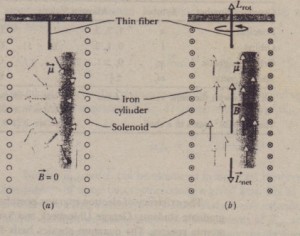