The Equation Of Continuity

You may have noticed that you can increase the speed of the water emerging from a garden hose by partially closing the hose opening with your dhurrie. Apparently the speed  of the water depends on the cross-sectional area A through which the’ water flows. Here we wish to derive an expression that relates ” and A for the steady flow of an ideal fluid through  a tube with varying cross section, like that in  The flow there is toward the right, and the tube segment shown part of a longer 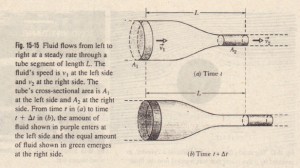 tube) has length L. The fluid has speeds 1’1 at the left end of the segment and 1’2 at the right end. The tube has cross-sectional areas AI at the left end and A2 at the right end. Suppose that in a time interval AI a volume All of fluid enters the tube segment at its left end (that volume is colored purple . Then. because the fluid is incompressible, an identical volume All must emerge from the right end of the segment (it is colored green in Fig. IS-Ish). We can use this common volume All to relate the speeds and areas. To do so. we first consider Fig. IS-16, which shows a side view of a tube of uniform cross oanalarea A. In Fig. IS-16o, a fluid element e is about to pass through the dashed  line drawn across the tube width. The element’s speed is r, so during a time intervalA I, the element moves along the tube a distance Ax = \.A I. The volume All of fluid that has passed through the dashed line in that time interval AI is

This relation between speed and cross-sectional area is called the equation of continuity for the flow of an ideal-fluid. It tells us that the flow speed increases when we decrease the cross-sectional area through which the fluid flows (as when we partially close off a garden hose with a thumb). Equation  applies not only to an actual tube but also to any so-called tube of flow, or imaginary tube whose boundary consists of streamlines. Such a tube acts like a real tube because no fluid element can cross a streamline: thus. all the fluid within a tube of flow must remain within its boundary.  shows a tube of flow in which the cross-sectional area increases from area AI to area A2 along the  flow direction. From Eq. IS-23 we know that, with the increase in area, the speed must decrease, as is indicated by the greater spacing between streamlines at the right in Similarly, you can see that in  the speed of the flow is greatest just above and just below the cylinder. We can rewrite .

in which RI’ is the volume flow rate of the fluid (volume per unit time). Its SI unit is the cubic meter per second (m’/s). If the density p of the fluid is uniform, we can multiply Eq. 15-24 by that density to get the mass flow rate Rm (mass per unit time