EXERCISES AND PROBLEMS  FORCE AND MOTION

1E. If the I kg standard body has an acceleration of 2.00  at 20° to the positive direction of the x axis, then what are (a) the x component and (b) the y component of the net force on it, and (c) what is the net force in unit-vector notation?

2E. Two horizontal forces act on a 2.0 kg chopping block that can slide over a friction less kitchen ‘counter, which lies in an  plane. One force is . Find the acceleration of the chomping block in !Init-vector notation

41:. While two forces act on it, a particle is to move at the constant velocity . One of the forces is . What is the other force?

5f. Three forces act on a particle that moves with unchanging velocity. What is the third force?

6P. There are two forces on the  2.0 kg box in the overhead view  of  but only one  shown. The figure also shows the acceleration of the box. Find the  second force (a) in unit vector notation and as (b) a magnitude  and (c) a direction. 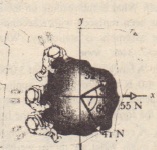 7P. Three astronauts, propelled by jet backpacks, push and guide a 120 kg asteroid toward a processing dock, exerting the forces.

8P. An overhead view of a 12 kg tire that is to be pulled by three ropes. One force , with magnitude 50 N) is indicated. Orient the other two forces  so that the magnitude of the resulting acceleration of the tire is least, and find that magnitude. 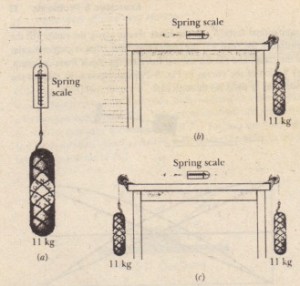 12E. When a nucleus captures a stray neutron. it must bring the neutron 10 a stop within the diameter of the nucleus by means of the strong force. That force, which “glues” the nucleus together. is approximately zero outside the nucleus. Suppose that a stray neutron with an initial speed  is just barely captured by a nucleus with diameter d = 1.0 X 10-14 m. Assuming that the strong force on the neutron is constant. find the magnitude of that force.

14E. Sun jamming. A sun yacht is a spacecraft with a large sail that is pushed by sunlight. Although such a push is tiny in everyday circumstances, it can be large enough to send the spacecraft outward from the Sun on a cost-free but slow trip. Suppose that the spacecraft has a mass of 900 kg and receives a push.

15E. The tension at which a fishing line snaps is commonly called the line’s “strength.What minimum strength is needed for a line that is to stop a salmon of weight 85 N in I I em if the fish is initially drifting. Assume a constant deceleration.

18E. A car traveling at 53 km/h hits a bridge abutment. A passenger in the car moves forward a distance of 65 cm (with respect to the road) while being brought to rest by an inflated air bag.

19E. Tarzan, who weighs 820 N, swings from a cliff at the end of a 20 m vine that hangs from a high tree limb and initially makes an angle of 220 with the vertical. Immediately after Tarzan steps off the cliff, the tension in the vine is 760 N.

20P. A 50 kg skier is pulled up a friction less ski slope that makes an angle of 8.00 with the horizontal by holding onto a that moves parallel to the slope.

21P. Two blocks are in contact on a friction less table. A horizontal force is applied to the larger block.

22P. A 1400 kg jet engine is fastened to the fuselage of a passenger jet by just three bolts (this is the usual practice). Assume that each bolt supports one-third of the load.

23P. An elevator and its load have a combined mass of 1600 kg. Find the tension in the supporting cable when the elevator, originally moving downward.

24P. Figure 5-36 shows four penguins that are being playfully pulled along very slippery (friction less) ice by a curator.

25P. An 80 kg person is parachuting and experiencing a downward acceleration. The mass of the parachute is 5.0 kg. ,(a) What is the upward force on the open parachute from the air?

26P Three blocks are connected and pulled to the right on a horizontal friction less table by a force will a magnitude .

28P. A worker drags a crate across a factory floor by pulling on a rope tied to the crate .The worker exerts a force of 450 N on the rope, which is inclined at 38° to the horizontal, and the floor exerts a horizontal force of 125 N that opposes the motion. 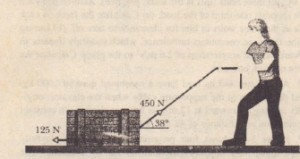 30P. An 85 kg man lowers himself to the ground from a height of 10.0 m by holding onto a rope that runs over a friction less pulley to a 65 kg sandbag. With what speed does the man hit the ground if he started from rest.