Figure I5-2a shows a tank of water-or other liquid-open to the atmosphere. As every diver knows, the pressure increases with depth below the air- water interface.The diver’s depth gauge. in fact.  a pressure sensor much like that of Fig. 15-1 h.  As every mountaineer knows. the pressure decreases with altitude as one ascends into the atmosphere. The pressures encountered by the driver and the mountaineer are usually called hydrostatic pressures. because- they are due to fluids that are static (at rest). Here we want to find an expression for hydrostatic pressure as a function of depth or altitude.  Let us look first at the increase in pressure with depth below the water’s surface.We set up a vertical)’ axis in the tank. with its origin at the air-water interface and the positive direction upward. We next consider a water sample contained in an imaginary right circular cylinder of horizontal base (or face) area A, such that Yl and 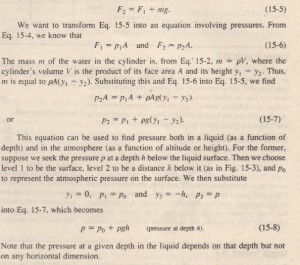 The pressure at a point in a fluid in static equilibrium depends on the depth of that point but not on any horizontal dimension of the fluid or its container.