Two long parallel wires carrying currents exert forces on each other. Figure 30-9 shows two such wires, separated by a distance d and carrying currents io and ib Let us analyze the forces on these wires due to each other. We seek first the force on wire b in  due to the current in wire a. That  current produces a magnetic field  and it is this agnetic field that actually causes  the force we seek. To find the force, then, we need the magnitude and direction o the field Ba at the site of wire b. The magnitude of Ba at every point of wire b is, from Eq. 30-6, 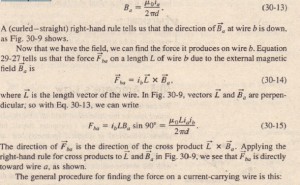 The direction of Fba is the direction of the cross product “[ x Ba. Applying the right-hand rule for cross products to and Ba in we see that Fba is directly  toward wire a, as shown. .The general procedure for finding the force on a current-carrying wire is this: ~ 10 find the force on a current-carrying wire due to a second current-carrying wire, first find the field due to the second wire at the site of the first wire. Then find the force on the first wire due to that field. o We could now use this procedure to compute the force on wire a due to the in wire b. We would find that the force is directly toward wire b; hence, the two wires with parallel currents attract each other. Similarly, if the two currents were  we could show that the two wires repel each other. Thus.. ~ Parallel currents attract, and anti parallel currents repel.The force acting between currents in parallel wires is the basis for the definition of the ampere, which is one of the seven SI base units. The definition, adopted in 1946, is this: The ampere is that constant current which, if maintained in two straight, parallel conductors of infinite length, of negligible circular cross ection, and placed I m apart in vacuum, would produce on each of these conductors a force of magnitude 2 X 10-7 newton per meter of length.

A rail gun is a device in which a magnetic force can accelerate a projectile to a high speed in a short time. The basics of a rail gun are shown in  A large current is sent out along one of two parallel conducting rails, across a conducting “fuse” (such as a narrow piece of copper) between the rails, and then back to thecurrent source along the second rail. The projectile to be fired lies on the far side of the fuse and fits loosely between the rails. Immediately after the current begins, the fuse element melts and vaporizes, creating a conducting gas between the rails where the fuse had been.  ,The curled-straight right-hand rule of reveals that the currents in there ails of  produce magnetic fields that are directed downward between the rails. The net magnetic field B exerts a force F on the gas due to the current i through the gas . With Eq. 30-14 and the right-hand rule for cross products, ‘we find that F points outward along the rails. As the gas is forced outward along the rails, it pushes the projectile, accelerating it by as much as 5 X lOng, and then launches it with a speed of 10 km/s, all within I ms.