To be useful in distinguishing wavelengths that are close to each other (as in a grating’, spectroscope), a grating must spread apart the diffraction lines associated with the various wavelengths. This spreading, called dispersion, is defined as 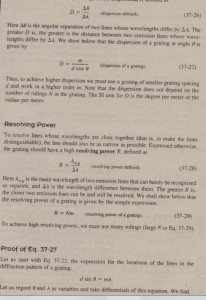 For small enough angles, we can write these differentials as small differences, obtaining

We star! with  which was derived from  the expression for the locations of the lines in the diffraction pattern formed by a grating. Here .H is the small wavelength difference between two waves that are diffracted by the grating, and d(} is the angular separation between them in the diffraction pattern. If :::.(}is to  be the smallest angle that will permit the two lines to be resolved, it must (byRayleigh’s criterion) be equal to the half-width of each line, which is given by