In the collective model, we assume that the nucleons move around at random and bump into each other frequently. ‘The independent particle model, however, is based on just the opposite assumption-namely, that each nucleon remains in a well defined quantum state within the nucleus and hardly makes any collisions at all! Thenucleus, unlike the atom, has no fixed center of charge; we assume in this model that each nucleon moves in a potential well that is determined by the smeared-out (time-averaged) motions of all the other nucleons. A nucleon in a nucleus, like an electron in an atom, has a set of quantum numbers  that defines its state of motion. Also, nucleons obey the Pauli exclusion principle, just as electrons do; that is, no two nucleons in a nucleus may occupy the same quantum state at the same time. In this regard, the neutrons and the protons are treated separately, each particle type with its own set of quantum states.  The fact that nucleons obey the Pauli exclusion principle helps us to understand the relative stability of nucleon states. If two nucleons within the nucleus are to  collide, the energy of each of them after the  ollision must correspond to the energy f and unoccupied state. If no such state is available, the collision simply cannot occur. Thus, any given nucleon experiencing repeated “frustrated collision opportunities” will maintain its state of motion long enough to give meaning to the statement that it exists in a quantum state with a well-defined energy. .  In the atomic realm, the repetitions of physical and chemical properties that we find in the periodic table are associated with a property of atomic electrons – namely,    they arrange themselves in shells that have a special ability when fully occupied.   e can take the atomic numbers of the no gases, 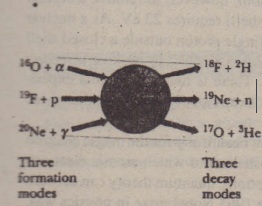 as magic electron numbers that mark the completion (or closure) of such shells. Nuclei also show such closed-shell effects, associated with certain magic .

Any nuclide whose proton number Z or neutron number N has one of these vlues turns out to have a special stability that may be made apparent in a variety of ways. Examples of “magic” nuclides are 180 (Z = 8), <IOCa(Z = 20, N = 20), 92Mo (N = 50), and 208Pb(Z = 82, N = 126). Both ~Ca and 208Pbare said to be “doubly magic” because they contain both filled shells of protons and filled shells of neutrons. The magic; number 2 shows up in the exceptional stability of the alpha particle (4He), which, with Z = N = 2, is doubly magic. For example, on the binding energy curve of Fig. 43-6, the binding energy per nucleon for this nuclide stands well above those of its periodic-table neighbors hydrogen, lithium, and berylium. The alpha particle is so tightly bound, in fact, that it is impossible to add another particle to it;
there is no stable nuclide with A =  5.The central idea of a closed shell is that a single particle outside a closed shell
can be relatively easily removed, but considerably more energy must be expended to remove a particle from the shell itself. The sodium atom, for example, has one valence) electron outside a closed electron shell. Only about 5 eV  is required to  strip the valence electron away from a sodium atom; however, to remove a secondelectron (which must be plucked out of a closed shell) requires 22 eV. As a nuclear case, consider 121Sb (Z = 51), which contains a single proton outside a closed shell of 50 protons. To remove this lone proton requires 5.8 MeV; to remove a second
proton, however, requires an energy of II MeV. There is much additional experimental evidence that the nucleons in a nucleus form closed shells and that these shells exhibit stable properties. We have seen that quantum theory can account beautifully for the magic electron numbers-that is, for the populations of the subshells into which atomic electrons are grouped. It rums out that, under certain assumptions, quantum theory can account equally well for the magic nucleon numbers! The 1963 Nobel prize in physics was.

Multi Muiolty Energy ExcJul1Igel The energy equivalent of one mass unit (u) is 931.5 MeV. The binding energy curve shows that middle- mass nuclides are the most stable and that energy can be re- Ieue4 both by fission of high-mass nuclei and by fusion of low mass nuclei

TI” Nuclear Force Nuclei are held together by an attractive force acting among the nucleons. It is thought to be a secondary  effect of the –. roru acting between the quarks that make upthe nucleons. Nuclei can exist in a number of discrete energy states,  each with a characteristic intrinsic angular momentum and magnetic moment

I1tllliDtlClin Delay Most known nuclides are r.adioactive; they ipOIIlaneOUSly decay at a rate R (= -dNldl) thz.tKs proportional to the number N of radioactive atoms present, th741roportionality constant beillj! the disintegration constant A. J1’Iis leads to the law of exponential decay:

]’he baIf-life Till”” (In 2)/A of a radioactive nuclide is the time reqIIired for the decay rate R (or the number N) in a sample to drop to half its initial value. I4r Dec., Some nuclides decay by emitting an alpha particle (a Belgium nuclelK, ~He). Such decay is inhibited by a potential energy barrier that cannot be penetrated according to classical physics
but is subject to tunneling according to quantum physics. The barrier penetrability, and thus the half-life for alpha decay, is very  sensitive to the energy of the emitted alpha particle.B~1tID«tI, In beta decay either UI electron or a positron is emitted· by a nucleus, aJons with a neutrino. The emitted particles.