For the problems of this chapter, we have only three independent equations at our disposal, usually two balance of forces equations and one balance of torques equation about a given rotation axis.

We have all had experience with a wobbly restaurant table, which we usually level by putting folded paper under one of the legs. If a big enough elephant sat on such a table, however, you may be sure that if the table did not collapse, it would deform just like the tires of a car. Its legs would all touch the floor, the forces acting upward on the table legs would all assume definite (and different) values as , and the table would no longer wobble. How do we find the values-of those forces acting on the legs?

To solve such indeterminate equilibrium problems, we must supplement equilibrium equations with some knowledge of elasticity. the branch of physics and engineering that describes how real bodies deform when forces are applied to them. The next section provides an introduction t.o this subject. 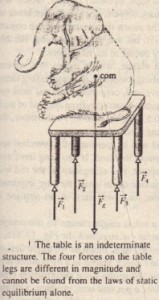 A horizontal uniform bar of weight 10 N is to hang from a ceiling by two wires that exert upward forces Ft and F2 on the bar. The figure shows four arrangements for the wires. Which arrangements.