In Section 37-2 we saw how to find the positions of the minima and the maxima i a single-slit diffraction pattern. Now we turn to a more general problem: find a expression for the intensity I of the pattern as a function of e, the angular position a point on a viewing screen. To do this, we divide the slit of ·4a into N zones of equal widths to small enough that we can assume each zone acts-as a source of Huygens wave We wish to superimpose the wavelets arriving at an arbitrary point P on the viewing screen, at angle e to the central axis, so that we can determine the amplitude.

As we continue to increase 0, the angle IlcP between adjacent phasors continues to increase, the chain of phasors begins to wrap back on itself, and the resulting coil begins to shrink. Amplitude Eo now increases until it reaches a maximum value in the arrangement shown in -. This arrangement corresponds to the first side maximum in the diffraction pattern. If we increase 0 a bit more, the resulting shrinkage of the coil decreases Eo, which means that the intensity also decreases. When 0 is increased enough, the head of the last phase again meets the tail of the first phasor. We have then reached the  second minimum.We could continue this qualitative method of determining the maxima and minima of the diffraction pattern but, instead, we shall now turn to a quantitative method.

The symbol a is just a convenient connection between the angle 0 that locates a 20 15 10 10 I~ 20 point on the viewing screen and the light intensity /(0) at that point./m is the greatest value of the intensities I( 0) in the pa~tem and occurs at the central maximum (where o = 0), and cP is the phase difference (in radians) between the top and bottom rays from the slit width a.

which is exactly Eq. 37-3, the expression that we derived earlier for the location of
the minima.
Figure shows plots of the intensity of a single-slit diffraction pattern, calculated with Eqs. 37-5 and 37-6 for three slit widths: a = A, a = 5A, and a = lOA. Note that as the slit width increases (relative to the wavelength), the width of the central diffraction maximum (the central hill-like region of the graphs) decreases that is, the light undergoes less flaring by the slit. The secondary maxima also decrease in width (and become weaker). In the limit of slit width a being much greater than wavelength ft., the secondary maxima due to the slit disappear; we then no longer have single-slit diffraction (but we still have diffraction due to the edges of  he wide slit, like that produced by the edges of the razor blade in . 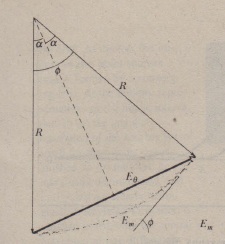 The arc of phasors in  represents the wavelets that reach an arbitrary point P on the viewing screen o corresponding to a particular small angle O. The amplitude Eo of the resultant wave at P is the vector sum of these phasors. If we divide the slit of into infinitesimal zones of width .:lx, the arc of phasors in aches the arc of a circle; we call its radius R as indicated in thatfigure. The length of the arc must be Em’ the amplitude at the center of the diffraction pattern, because if we straightened out the arc we would have the phasor arrangement of  (shown lightly in . The angle ¢ in the lower part of Fig. 37-8 is the difference in phase between  he infinitesimal vectors at the left and right ends of arc E”,. From the geometry, ¢is also the angle between the two radii marked R in . The dashed line in that figure. which bisects ¢. then forms two congruent right triangles. From either triangle we can write 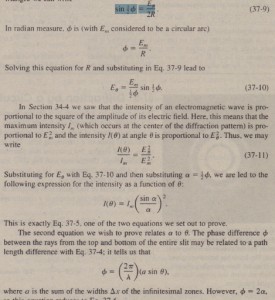