The colors we see when sunlight illuminates a soap bubble or an oil slick are caused by the interference of light waves’ reflected from the front and back surfaces of a thin transparent film. The thickness of the soap or oil film is typically of the order of magnitude of the wavelength of the (visible) light involved. (Greater thicknesses spoil the coherence of the light needed to produce the colors.)

Fig.36-12 Light waves. represented with ray i, are incident on ~ thin film of thickness Land  index of refraction n2′ Rays ‘I and ‘2 represent light waves that have been reflected by the front and back surfaces of the film, respectively. (All three rays are actually nearly perpendicular to the filer.)The interference of the waves of ‘I and ‘2with each other depends on
their phase difference. The index of refraction nl of the medium at the left can differ from the index of refraction nJ of the medium at the right, but for now we assume that both media are air. with III = n) = 1.0, which is less than n2’ 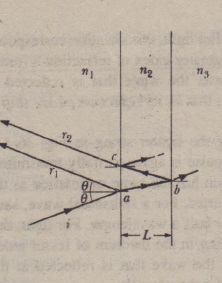 Figure 36-12 shows a thin transparent film of uniform thickness L and index of refraction n2, illuminated by bright light of wavelength Afrom a distant point source. For now, we assume that air lies on both sides of the film and thus that 111 = n3 in  Fig. 36-12. For simplicity, we also assume that the light rays are almost perpendicular to the film (6 = 0). We are interested in whether the film is bright or dark to an observer viewing it almost perpendicularly. (Since the film is brightly illuminated,  how could it possibly be dark? You will see.)The incident light, represented by ray i, intercepts the front (left) surface of the film at point a and undergoes both reflection and refraction there. The reflected ray 1″1 is intercepted by the observer’s eye. The refracted light crosses the film to point b on the back surface, where it undergoes both reflection and refraction. The light reflected at b crosses back through the film to point c, where it undergoes both reflection and refraction. The light refracted at c, represented by ray ‘2’ is intercepted by the observer’s eye. If the light waves of rays 1″) and 1″2 are exactly in phase at the eye, they produce
an interference maximum, and region ac on the film is bright to the observer. If they are exactly out of phase, they produce an interference minimum, and region ac is dark to the observer, even though it is illuminated. If there is some intermediate phase difference, there are intermediate interference and intermediate brightness. Thus, the key to wh at the observer sees is the phase difference between the waves of rays ‘) and 1″2’ Both rays are derived from the same ray i, but the path involved in producing 1″2 involves light traveling twice across the film (a to b, and then b to c), whereas the path involved in producing 1″) involves no travel through the film. Because 6 is about zero, we approximate the path length difference between the waves of r) and ‘2 as 2L However, to find the phase difference between the waves. we cannot just find the number of wavelengths That is equivalent to a path length difference of 2L. This simple approach is impossible for two reasons: (I) the path length difference occurs in a medium other than air. and (2) reflections are involved, which can change the phase.