Look now at Fig. 42-12. It shows that. if we place a potential difference across a p-n junction in one direction (here labeled + and “Forward bias”), there will be a current through the junction, However, if we reverse the direction of the potential difference, there will be approximately zero current through the junction. One application of this property is the junction rectifier, whose symbol is shown in ; the arrowhead corresponds to the p-type end of the device and points in the allowed direction of conventional current. A sine wave input potential  o the device l3a) is transformed to a half-wave output potential  by the junction rectifier; that is, the rectifier acts as essentially a closed switch (zero resistance) for one polarity of the input potential and as essentially an  pen switch (infinite resistance) for the other.The average value of the input voltage in I3a is zero, but that of the  output volta,tin is not. Thus, a junction rectifier can be used as part of an app rates to convert an alternating potential difference into a constant potential difference, as for an electronic power supply, shows why a p-n junction operates as a junction rectifier, In  a battery is connected across the junction with its positive terminal connected date the p side. In this forward-bias connection, the p side becomes more positive than it was before the connection and then side becomes more negative, thus decreasing the height of the potential barrier Vo of , More of the majority carriers can now surmount this smaller barrier; hence, the diffusion current Id•ff increases markedly.  The minority carriers that form the drift current, however,  no barrier, so the drift current Drift is not affected by the external battery. The nice current balance that existed at zero bias  is thus upset and, as shown i, a large net forward current IF appears in the circuit. Another effect of forward bias is to narrow the depletion zone, as a comparison  of  and Fig. 42-140 shows. The depletion zone narrows because the reduced potential barrier associated with forward bias must be associated with a  smaller space charge. Because the ions producing the space charge are fixed in their lattice sites, a reduction in their number can come about only through a reduction  in the width of the depletion zone.Because the depletion zone normally contains very few charge carriers, it is normally a region of high resistivity. However, when its width is substantially re- 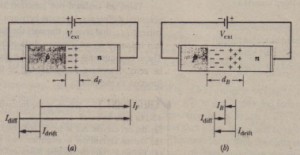