In this and the next section. we discuss some of the particles of one of our classification schemes: lepton or hadron. We. begin with the leptons. those particles on which the strong force does not act. So far. we have encountered. as leptons. the familiar electron and the neutrino that accompanies it in beta decay. ‘The move on, whose decay is  described in Eq. 45-8, is another member of this family. Physicists gradually learned that the neutrino that appears in Eq. 45-7, associated with the  production of a , is not the same particle as the neutrino produced in beta decay, associated with the appearance of an electron. We call the former the muon neutrino (symbol II,.) and the latter the electron neutrino (symbol “c) when it is necessary to distinguish between them. These two types of neutrino are known to be different particles because, if a beam of muon neutrinos (produced from pion decay as in Eq. 45-7) strikes a solid target, only muons-and never electrons-are produced. On the other hand, if electron neutrinos (pro used by the beta decay of fission products in a nuclear reactor) strike a solid target, only t’electrons-and never muons-are produced.  another lepton, the tau, was discovered at SLAC in 1975; its discoverer, Martin Perl, shared the 1995 Nobel prize in physics. The tau has its own associated neutrino, different still from the other two. Table 45-2 lists all the leptons (both particles and  antiparticles); all have a spin quantum numbers of ].There are reasons for dividing the leptons into three families, each consisting of a particle (electron, muon, or tau), its associated neutrino, and the corresponding  antiparticles. Furthermore, there are reasons to believe that there are only the three families of leptons shown in Table 45-2. Leptons have no internal structure and no measurable dimensions; they are believed to be truly pointlike fundamental particles when they interact with other particles or with electromagnetic waves.

The Conservation Of Lepton Number

According-to experiment, particle interactions involving leptons obey a certain conservation law for a quantum number called the lepton number L. Each (normal) particle in Table 45-2 is assigned L = +I and each antiparticle is assigned L = – I.  All other particles, which are not leptons, are assigned L = O. Also according to  experiment.

In all particle interactions, the net lepton number for each family is IepalIlely c0nserved.Thus, there are actually three lepton numbers 4, L,., L., and the net of each must. 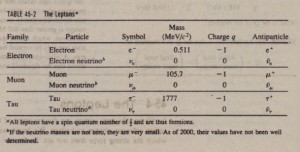 remain unchanged during any particle interaction, This experimental fact is called the law of conservation oC lepton number. We can illustrate this law by reconsidering the antimuon decay process shown in Eq. 45-8, which we now write more fully as.

We are now ready to consider hadrons (baryons and mesons), those particles whose interactions are governed by the strong force. We start by adding another conservation  law to our list: conservation of baryon number.To develop this conservation law. let us consider the proton decay process

This process never happens. We should be glad that it does not because otherwise all protons in the universe would gradually change into positions, with disastrous consequences. Yet this decay process does not violate the conservation laws involving energy, linear momentum, or lepton number. We account for the apparent stability of the proton-and for the absence of many other processes that might otherwise occurs-by introducing a new quantum
number, the baryon number B, an d a new conservation law, the conservation or baryon number . 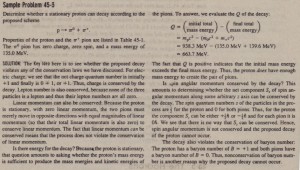