Nowadays, we can the brightly colored “electronic” numbers that glow at us from cash registers and gasoline pumps. microwave ovens and alarm clocks. all we canner seem te co without the invisible infrared lilacs that control elevator  dCHtrsand operate television sets via remote control. In nearly all cases this light is,e.matt fern junction operating as a Eight-emitting tiliNe (LED). How can a junction literate lightCensitller first a simple semen semi conduction electron from the bottom of the con4uction ~an4 falls into a hole at the top ef the valence ball. an energy E,~equal to the lap width is released. In silicon. lermanium, and many other semiconductors. this energy is largely transfermes’ i to thermal energy of the vi~ratinl lattice. andas a result. ne Iiaht ‘is emitted. In some semiconductors. however. including gallium arsenide, the energy can be emitted as a ph,oton o,f energy hf at wavelength

To emit enough Wight to be. useful. as an LED. the material must have a suitably large umber of electron hole transitions. This condition is not satisfied by. pure semiconductor  cause. at rHm temperature. there are simply not enough electron – hole  airs. As Fil. 42-10 suggests. doping will not hell’. In doped ,,-type material the
number of cent Lucien electrons is greatly increased. ~ut there are net enough holes for them te cum fine with; in .epell ,-type material there are plenty of holes but not  ensue & electronics te cuisine with them. Thus. neither a pure semiconductor nor a .epe4 semi centiliter can p;evi.e enough electron – hole transitions to serve as-a practical LED. What we needles a semi consumer material with a very large number of electrons in the can collection ball.n.a correspond tellingly large number of  in the valence all.A tIIevicewith this property can ~ fabricated by placing a strong forward bias  n a heavily tIIepetllpen junction. as in  In such an arrangement the current I through the tIIevice serves to inject electrons inte the n-type material and to inject holes into the p-type material. If the doping~ is heavy enough and the current is great enough, the depletion zone can ~come very narrow. perhaps only a few micrometers  wile. The result is a great number .ensity of electrons in the n-type material facing cores pentllinaly great number tIIensity of holes in the p-type material. across the narrow tIIepletion zone. With such react number densities so near. many electron-hole combination.ns occur. causing light to be emitted from that zone.   hews the constructive of an actual LED. Commercial LEOs d signed for the visible region are commonly based on gallium. s suitably doped with arsenic and phosphorus atoms. An arrangement in which60% of the nonthallium sites are occupied by arsenic ions and 40% by phosphorus ions results in a lap width E~ of iMut 1.8 eV. corresponding to red light. Other  doping and transition level arrangements make it possible to construct LEOs that emit light in essentially any desired region of the visible and near-visible spectra 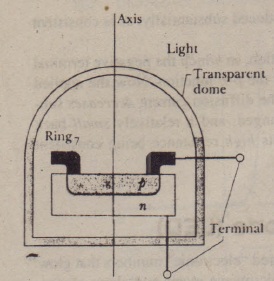 In the arrangement of  there are many electrons in the conduction band of the »-type material and many holes in the valence band of the p-type material. Thus. there is a population inversion for the electrons: that is. there are more electrons in higher energy levels than in lower energy levels. As we discussed in Section 1-12, this is normally a necessary-but not a sufficient-condition for laser action. When a single electron moves from the conduction band to the valence band. it can release its energy as a photon. This photon can stimulate a second electron to  fall into the valence band. producing a second photon by stimulated emission. In this way, if the current through the junction is great enough. a chain reaction of stimulated emission events can occur and laser light can be generated. To bring this about, opposite faces of the P-II junction crystal must be flat and parallel. so that light can be reflected back and forth within the crystal. (Recall that in the   laser of Fig. 41-21, a.pair of mirrors served this purpose.) Thus. a P-II junctions act as a junction laser, its light output being highly coherent and much more sharply defined in wavelength than light from an LED. Junction lasers are built into compact disc (CD) players. where. by detecting reflections from the rotating disc, they are used to translate microscopic pits in the disc into sound. They are also much used in optical communication systems based on optical fibers. Figure 42-17 suggests their tiny scale. Junction lasers are usually designed to operate in the infrared region of the electromagnetic spectrum because optical fibers have two “windows” in that region (at A = 1.31 and 1.55 pm) for which the energy absorption per unit length of the fiber is a minimum.