Magnetic Force on a Current-Carrying Wire

We have already seen (in connection with the Hall effect) that a magnetic field exerts a sideways force on electrons moving in a wire. This force must then be transmitted to the wire itself, because the conduction electrons cannot escape sideways out of the wire. 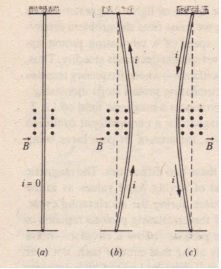 In Fig. 29-16a, a vertical wire, carrying no current and fixed in place at both ends, extends through the gap between the vertical pole faces of a magnet. The magnetic field between the faces is directed outward from the page. In Fig. 29- I 6b,  a current is sent upward through the wire; the wire deflects to the right. In , we reverse the direction of the current and the wire deflects to the left. shows what happens inside the wire of  I6. We see one of the conduction electrons, drifting downward with an assumed drift speed “d’ Equation 29-3, in which we must put dr= 90°, tells us. that a force F8 of magnitude elldB must act on each such election. From Eq. 29-2 we see that this force must be directed to the right. We expect then that the wire as a whole will experience a force to the right, in agreement with  If, in Fwe were to reverse either the direction of the magnetic field or the direction of the current, the force on the wire would reverse, being directed now to the left. Note too that it does not matter whether we consider negative charges drifting downward in the wire (the actual case) or positive charges drifting upward. The direction of the deflecting force on the wire is the same. We are safe then in dealing with a current of   positive charge.Consider a length L of the wire in . All the conduction electrons in this section of wire will drift ‘past plane xx in Fig. 29- I 7 in a time t = L /Vd’ Thus, in that time a charge given by. 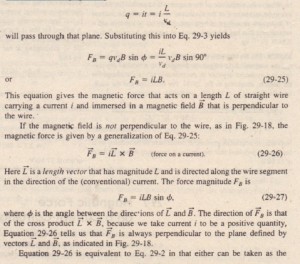