As-we discussed briefly in Section 32-4, a proton has an intrinsic spin angular momentum S and an associated spin magnetic dipole moment Ii that are in the same direction (because the proton is positively charged). If a proton is.located in a uniform  magnetic field jj directed along a z-axis, the z component IJ.: of the spin mai:kinetic dipole moment can have only two quantized orientations: either parallel B or antiparallel to B, as shown in . From Eq. 29-38, WI! know that these two orientations differ in energy by 2IJ.:B, which is the energy involved in reversing a magnetic dipole in a uniform magnetic field. The lower energy state is the one with Ji.: parallel to B, and the higher energy state has Ji., initially to B. Let us place a drop of water in a uniform magnetic field B; then the protons in the hydrogen of the water molecules each have IJ.: either parallel or antiparallel to 8. If we next apply to the drop an alternating electromagnetic field of a certain frequency I, the protons in the lower energy state can undergo reversal of their Ji.,  orientation. This process of reversal is called spin-flipping (because the reversal of a proton’s magnetic dipole moment requires a reversal of the proton’s spin). The frequency Required fOTthe spin-flipping is given by

a condition called magnetic resonance (OT,as originally, nuclear magnetic resonance). In words. if an alternating electromagnetic field is to cause protons to spin flip in the magnetic field. the  associated with that field must have an energy  hi equal to the energy difference 2p./J between the two possible orientations of Ji., and thus proton spin) in that field. Once a proton is spin-flipped to the higher energy state. it can drop back to the lower energy state by emitting a photon of the same energy given by Eq. 41 -21.Ag. 41-11A nuclear magnetic resonance spectrum for ethanol. The spectral lines represent the absorption of energy associated with spin Hips of protons. The three groups of lines correspond, as indicated, to protons in the OH group, the CH2 group, and the CH] group of the ethanol molecule. Note that the two protons in the CH2 group occupy four different local environments. The entire horizontal axis covers less than 10-4 T. Normally more protons are in the lower energy state than in the higher energy state, as – JOh suggests. This means that there will be a detectable net absorption of energy from the alternating electromagnetic field. The constant field whose magnitude 8appears in Eq. 41-21 is actually not the imposed external field B.xt in which the water drop is placed; rather, it is that field as modified by the small, local, internal magnetic field 81oc,t due to the magnetic moments of the atoms and nuclei near a given proton. Thus, we can rewrite Eq. 41-21 as

To achieve magnetic resonance, it is customary to leave the frequency f of the electromagnetic oscillations fixed and to vary Bex• until Eq. 41-22 is satisfied and an  absorption peak is recorded.Nuclear magnetic resonance is a property that is the basis for a valuable analytical tool. particularly for the identification of unknown compounds.   shows a nuclear magnetic resonance spectrum, as it is called, for ethanol, whose formula we may write as CH)-CH2-OH. The various resonance peaks all represent spin flips of protons. They occur at different values of BeXi however, because the  local environments of the six protons within the ethanol molecule differ from one another. The spectrum of Fig. 41-11 is a unique signature for ethanol. Spin technology, called magnetic resonance imaging (MRI), has been applied to medical diagnostics with great success. The protons of the various tissues of the human body are situated in many different local magnetic environments. When the body, or part of it, is immersed in a strong external magnetic field, these environmental differences can be detected by spin-flip techniques and translated by computer processing into an image resembling  those produced by x-rays. Figure 41-12, for example, shows a cross section of a human head imaged by this method. 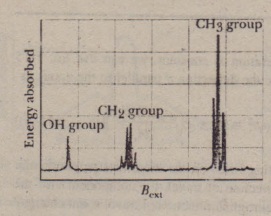