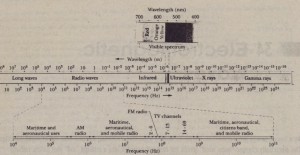 James Clerk Maxwell’s crowning achievement was to show that a beam of light is a traveling wave of electric and magnetic fields-an electromagnetic wave-and thus that optics, the study of visible light. is a branch of electromagnetism. In this chapter we move from one to the other: we conclude our discussion of strictly electric
and magnetic phenomena,  and we build a foundation for optics.In Maxwell’s time (the mid lSOOs), the visible, infrared, and ultraviolet forms of light were the only electromagnetic waves known. Spurred on by Maxwell’s work,
however, Heinrich Hatt discovered what we now call radio waves and verified that they move through the laboratory at the same speed as visible light. As -1 shows, we now know a wide spectrum (or range) of electromagnetic
waves, referred to by one imaginative writer as “Maxwell’s rainbow.” Consider the extent to which we are bathed in electromagnetic waves throughout this . The Sun, whose radiations define the environment in which we as a species have  evolved and adapted, is the dominant source. We are also crisscrossed by radio and television signals. Microwaves from radar systems and from telephone relay systems may reach us.  electromagnetic waves from Light bulbs, from the heated engine blocks of automobiles, from x-ray machines, from lightning flashes, and from buried radioactive materials. Beyond this, radiation reaches us from stars and other objects in our galaxy and from other galaxies. Electromagnetic waves also travel in the other direction. Television signals, transmitted from Earth since about 1950, have now taken news about us (along with episodes of I Love Lucy. albeit very faintly)
to whatever technically sophisticated  d inhabitants there may be on whatever planets may encircle the nearest 400 or so stars. In the wavelength scale in  (and similarly the corresponding frequency scale), each scale meter represents a change in wavelength (and correspondingly in frequency) by a factor of 10. 1be scale is open-ended; the wavelengths of electromagnetic waves have DO inherent upper or lower bounds.