An event is something that happens, to which an observer can assign three space coordinates and one time coordinate. Among many possible events are (I) the turning on or off of a tiny Lightbulb, (2) the collision of two particles, (3) the passage of a  pulse of light through a specified point, (4) an explosion, and (5) the coincidence of the hand of a clock with a marker on the rim of the clock. A certain observer, fixed in a certain inertial reference frame, might, for example, assign to an event A the coordinates given in Table 38-1. Because space and time are entangled with each  other in relativity, we can describe these coordinates collectively as spacetime coordinates.The coordinate system itself is part of the reference frame of the observer. A given event may be recorded by any  umber of observers, each in a different inertial reference frame. In general, different observers will assign different spacetime  coordinates to the same event. Note that an event does not “belong” to a particular inertial reference frame. An event is just something that happens, and anyone in any reference frame may detect it and assign spacetime coordinates to it.  Making such an assignment can be complicated by a practical problem. For example, suppose a balloon bursts 1 ken to your right while a firecracker pops 2 ken to your left, both at 9:00 a.m. However, you do not detect either event precisely at 9:00 a.m. because light from the events has not yet reached you. Because light from the pop has farther to go, it arrives at your eyes later than does light from the balloon burst, and thus the pop will seem to have’ occurred later than the burst. To sort out the actual times and to assign 9:00 a.m. to both events, you must calculate the travel times of the light and then subtract them from the arrival times. This procedure can be very messy in more challenging situations, and we need an easier procedure that automatically eliminates any concern about the traveltime  from an event to an observer. To set up such a procedure, we shall construct an imaginary array of measuring rods and clocks throughout the observer’s inertial frame (the array moves rigidly with the observer). This construction may seem contrived, but it spares us much confusion and calculation and allows us to find the space coordinates, the time coordinate, and the spacetime coordinates, as follows. 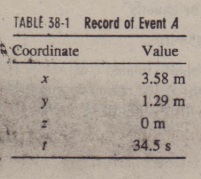 I. The Space Coordinates. We imagine the observer’s coordinate system fined with a close-packed, three-dimensional array of measuring rods, one set of rods parallel each of the three coordinate axes. These rods provide a way to determine coordinates along the axes. Thus. if the event is, say. the turning on of a small Lightbulb, the observer. in order to locate the position of the event, need only read the three space coordinates at the bulb’s location.

2. The Time Coordinate. For the time coordinate. we imagine that every point of intersection in the array of measuring rods includes a tiny clock, which the observer can read by the light generated by the event. Figure 38-3 suggests one  plane in the “jungle gym” of clocks and measuring rods that we have described.The array of clocks must be synchronized properly. It itS not enough to as- semble a set of identical clocks. set them all to the same time. and then move them to their assigned positions. We do not know. for example. whether moving the clocks will change their rates. (Actually. it will.) We must put the clocks in  place and (hen synchronize them.If we had a method of transmitting signals at infinite speed. synchronization would be a simple matter. However. no known signal has this property. We therefore choose light (interpreted broadly to include the entire electromagnetic spectrum) to send out our synchronizing signals because. in vacuum. light travels at the greatest possible speed. the limiting speed c.
Here is one of many ways in which an observer might synchronize an array of clocks using light signals: The observer enlists the help of a great number of temporary helpers. one for each clock. The observer then stands at a point selected  as the origin and sends out a pulse of light when the origin clock reads ( = O.When the light pulse reaches the location of a helper. that helper sets the clock there to read ( = rlc, where r is the distance between the helper and the origin.  The clocks are then synchronized.

3. The Spacetime Coordinates. The observer can now assign spacetime coordinates to an event by simply recording the time on the clock nearest the event and the position as measured on the nearest measuring rods. If there are two events, the observer computes their separation in time as the difference of the times on clocks near each, and their separation in space from the differences of coordinates on rods near each. We thus avoid the practical problem of calculating the travel  times of signals that reach the observer from the events.