The feature that defines a metal is that, as  shows, ~ highest occupied energy level falls Somewhere nellie “middle of an .energy band. If we’ apply a potential difference across a-metal, a current can exist because there are plenty of vacant levels at nearby higher energies into which electrons (the charge carriers in a metal) can jump. Thus, a metal can  conduct electricity because ‘electrons in its highest occupied band can easily move into higher energy levels within that band.In Section 27-6 we introduced the free-electron model of a metal, in which the conduction electrons are free to move throughout the volume of the sample like the molecules of a gas in a closed container. We used this model to derive an expression for the resistivity of a metal, assuming that the electrons follow the laws
of Newtonian mechanics. Here we use that same model to explain the behavior of the electrons-called the conduction electrons-in the partially filled band of Fig. 2-4b. However, we follow the laws of quantum physics by assuming the energies of these electrons to be quantized and the Pauli exclusion principle to hold. e assume too that the electric potential energy of a conduction electron has the same constant value at all points within the lattice. If we choose this value’ of the potential energy to be zero, as we are free to do, then the mechanical energy E of the conduction electrons is entirely kinetic. The level at the bottom of the partially filled band of Fig. 42-4b corresponds to
E = O. The highest occupied  level in this band at absolute zero (T = 0 K) is called the Fermi level, and the energy corresponding to it is called the Fermi energy EF; for copper, EF = 7.0 eV. The electron speed corresponding to the Fermi energy is called the Fermi speed VF’ For copper the Fermi speed is 1.6 X 106 m/s. This fact should.be enough to shatter the popular misconception that all motion ceases at absolute zero; at that temperature-and solely because of the Pauli exclusion principle-the conduction electrons an: stacked up in the partially filled band of Fig. 42-4b with energies that range from zero to the Fermi energy.

How Many Conduction Electrons Are There?

We can relate the number of atoms in a sample to various other properties of the sample and the material making up the sample with the following equation.

How many conduction electrons are in a cube of magnesium with a volume of 2.00 x 10 -6 m3? Magnesium atoms are bivalent, 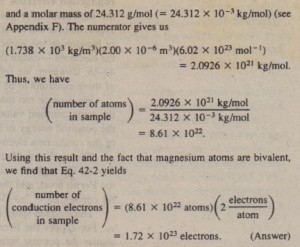 Our practical interest in the conduction of electricity in metals is at temperatures above absolute zero. What happens to the electron distribution of at such higher temperatures? As we shall see, surprisingly little. Of the electrons in the partially filled band of  only those that are close to the Fermi energy find unoccupied levels above them, and only those electrons are free to be boosted to these higher levels by thermal agitation. Even at T = 1000 K, a temperature at which copper would glow brightly in a dark room, the distribution of electrons among the available levels does not differ much from the  distribution at T.= 0 K.Let us see why. The quantity kT, where k is the Boltzmann constant, is a convenient measure of the energy that may be given to a conduction electron by the random thermal motions of the lattice. At T ~ 1000 K, we have kT = 0.086 eY. No electron can hope to have its energy changed by more than a few times this relatively small amount by thermal agitation alone, so at best, only those few conduction electrons whose energies are close to the Fermi energy are likely to jump to higher energy levels due to’ thermal agitation. Poetically stated, thermal agitation normally causes only ripples on the surface of the Fermi sea of electrons; the vast depths of  that sea lie undisturbed.

How Many Quantum States Are There?

The ability of a metal to conduct electricity depends on how many quantum states are available to its electrons and what the energies of those states are. Thus, a question arises: What are the energies of the individual states in the partially filled band of  This question is tQOdifficult to answer because we cannot possibly list the energies of so many states individually. We ask instead: How many states in a unit volume of a sample have energies in the energy range E to E + dE? We write this number as N(E) dE, where N(E) is called the density of states at energy E. The conventional unit for N(E) dE is states per cubic meter (states/m”, or simply m=’): the unit for N(E) is states per cubic meter per electron-volt (m ? ey-t).We can find an expression for the density of states by counting the number of standing electron matter waves that can fit into a box the size of the metal sample we are considering. This is analogous to counting the number of standing waves of sound that can exist in a closed organ pipe. The differences are that our problem is  three-dimensional (the organ pipe problem is one-dimensional) and the waves are atter waves (the organ-pipe waves are sound waves). The result of such counting can be shown to be

The ability of a metal to conduct electricity depends on the probability that available vacant levels will actually be occupied. Thus, another question arises: If an energy level is available at energy E, what is the probability P(E) that it is actually occupied  by an electron? At T = 0 K, we know that for all levels with energies below theFermi energy, P(E) = I, corresponding to a certainty that the level is occupied. We also know that, at T = 0 K, for all levels with energies above the Fermi energy, P(E) = 0, corresponding to a certainty that the level is not occupied.  illustrates this  situation.  To find P(E) at temperatures above absolute zero, we must use a set of quantum counting rules called Fermi – Dirac statistics, named for the physicists who introduced them. Using these rules, it is possible to show that the occupancy probabiUty P(E) is . 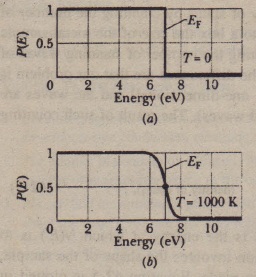