In section 25-5 discussed induced surface charges on a dielectric in an electric field be these surface charges can come about. If the material were a con- 101 would be simple. Conductors contain charge that is free to move, and field is present, some of the charge redistributes itself on the surface so ~ llf11:l~ III Doe c field inside the conductor. But an ideal dielectric has no charges b so how can a surface charge occur? we have to look again at rearrangement of charge at the molecues, such as ~O and N20, have equal amounts of positive and lopsided distribution, with excess positive charge concentrated on we and negative charge on the other. As we described in Section called an electric dipole, and the molecule is called a polar electric field is present in a gas or liquid with polar molecules, the randomly (Fig. 25-12a). When they are placed in an electric lend to orient themselves as in Fig. 25-12b, as a result of the described in Section 22-9. Because of thermal agitation, the alignment is not perfect.

With either polar or nonpolar molecules the redistribution of charge caused by the field leads to the formation of a layer of charge on each surface of the dielectric material (Fig. 25-14). These layers are the surface charges described in Section 25-5; their surface charge density is denoted by CT,. The charges are not free to move indefinitely, as they would be in a conductor, because each charge is bound to a molecule. They are in fact called bound charges to distinguish them from the free charges that are added to and removed from the conducting capacitor plates. In the interior of the material the net charge per unit volume remains zero. As we have seen, this redistribution of charge is called polarization, and we say that the material is polarized.

As we discussed in Section 22-4, polarization is also the reason a charged body, such as an electrified plastic rod, can exert a force on an uncharged body such as a bit of paper or a pith ball. Figure 25-16 shows an uncharged dielectric sphere B in the radial field of a positively charged body A. The induced positive charges on B experience a force toward the right, while the force on the induced negative charges is toward the left. The negative charges are closer to A, and thus are in a stronger field, than are the positive charges. The force toward the left is stronger than that toward the right, and B is attracted toward A, even though its net charge is zero. The attraction occurs whether the sign of A’s charge is positive or negative (see Fig. 22-5). Furthermore, the effect is not limited to dielectrics; an uncharged conducting body would be attracted in the same way. 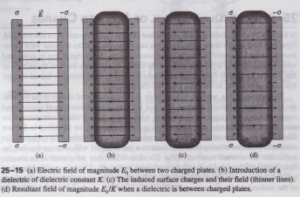