Let’s think first about a listener L moving with velocity uL toward a stationary source S (Fig. 21-7). The source emits a sound wave with frequency fs and wavelength A = u/fs. The figure shows several wave crests, separated by equal distances A. The wave crests approaching the moving listener have a speed of propagation relative to the listener of (u + uJ. So the frequency K with which the crests arrive at the listener’s position (that is, the frequency the listener hears)

Now suppose the source is also moving, with velocity Vs (Fig. 21-8). The wave speed relative to the wave medium (air) is still v; it is determined by the properties of the medium and is not changed by the motion of the source. But the wavelength is no longer equal to vIis. Here’s why. The time for emission of one cycle of the wave is the period T = I’fs. During this time, the wave travels a distance vT = v/fs and the source moves a vsT = v.jls. The wavelength is the distance between successive wave crests, and
. . determined by the relative displacement of source and wave. As Fig. 21-8 shows, . erent in front of and behind the source. In the region to the right of the source Fi.” _I that is, in front of the source) the wavelength is 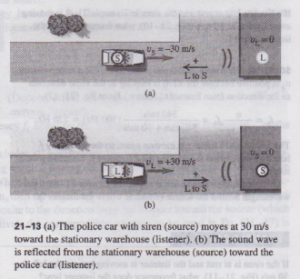