On December 2, 1942, when their reactor first became operational (Enrico Fermi and his associates had every right to assume that they had put into operation the first fission reactor that had ever existed on this planet. About 30 years later it was discovered that. if they did in fact think that, they were wrong. 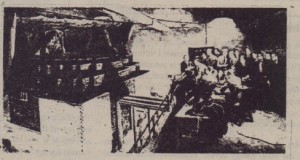 Some two billion years ago, in a uranium deposit now being mined in Gabon, West Africa, a natural fission reactor apparently went into operation and ran for perhaps several hundred thousand years before shutting down. We can test whether this could actually have happened by considering two questions.

1. Was There Enough Fuel? The fuel for a uranium-based fission reactor must be the easily fissionable isotope =u, which constitutes only 0.72% of natural uranium. This isotopic ratio has been measured for terrestrial samples, in Moon rocks, and in meteorites; in all cases the abundance values are the same. The clue tQ the discovery in West Africa was that the uranium in that deposit was deficient in 235U, some samples having abundances as low as 0.44%. Investigation led to the speculation that this deficit in 235U could be accounted for if, at some earlier time, the 235U was partially consumed by the operation of a natural fission reactor. The serious problem remains that, with an isotopic abundance of only 0.72%,  reactor can be assembled (as Fermi and his team leMned) only after thoughtful design and with scrupulous attention to detail. There seems no chance that a nuclear reactor could go critical “naturally.”  However, things were different in the distant past. Both 23~U and 23RU are radioactive, with half-lives of7.04 X 108 Yand 44.7 X 108 y, respectively. Thus, the half-life of the readily fissionable 23SU is about 6.4 times shorter than that of 238U. Because 235U decays faster, there was more of it, relative to 238U, in the past. Two billion years ago, in fact, this abundance was not 0.72%, as it is now, but 3.8%. This abundance happens to be just about the abundance to which natural uranium is artificially enriched to serve as fuel in modern power reactors. With this readily fissionable fuel available, the presence of a natural reactor (provided certain other conditions are met) is less surprising. The fuel was there. Two billion years ago, incidentally, the highest order of life-form to have evolved
was the blue-green alga.

2. What Is the Evidence? The mere depletion of 235U in an ore deposit does not prove the existence of a natural fission reactor. One looks for more convincing evidence. If there was a reactor, there must now be fission products. Of the 30 or so  elements whose stahle isotopes are produced in a reactor, some must still remain.Study of their isotopic abundances could provide the evidence we need. Of the several elements investigated, the case of neodymium is spectacularly convincing.  show’s the isotopic abundances of the seven stable neodymium  isotopes as they are normally found in nature.  shows these abundances as they appear among the ultimate stable fission products of the

fission of 23~U.The clear differences are not surprising, considering the totally different origins of the two sets of isotopes. Note particularly that 142Nd, the dominant isotope in the natural element, is absent from the fission products.  The big question is: What do the neodymium isotopes found in the uranium ore body in West Africa look like? If a natural reactor operated there, we ,would expect to find isotopes from both sources (that is, natural isotopes as well as fission-produced isotopes).  shows the abundances after dual-source and other corrections have been made to the data. Comparison of  and c indicates that there was indeed a natural fission reactor at work.  he failure of the fission products of the West African natural reactor to migrate far from their region of production over about 2 billion years may support the idea of long-term storage of radioactive waste in suitably chosen geological environments.