Newton’s first law, we have seen that when a body is acted on by no force it moves with constant velocity and zero acceleration. In Fig. 4-9a a sliding to the right on wet ice, so there is negligible friction. There are forces acting on the puck; the downward force of gravity and the upward exerted by the ice surface sum to zero. So the net force I if acting on the puck has zero acceleration, and its velocity is constant in newton second law of motion. 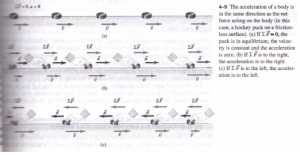