In 1932 English physicist lames Chadwick~~ discovered the neutron. A few years I~ Enrico Fermi in Rome found hat when various elements are bombarded by neutrons, new radioactive elements are produced. Fermi had predicted that.the neulrOll, being , w~ be a useful nuclear projectile; unlike the proton or the alpha par. 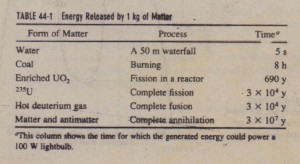 ticle, it experiences no repulsive Coulomb force when il nears a nuclear surface. Even thermal neutrons, which are slowly moving neutrons in thermal equilibrium with the surrounding matter at room temperature, with a mean kinetic energy of only about 0.04 eV. are useful projectiles in nuclear studies. Jn the late 1930s physicist Lise Meitner and chemists Otto Hahn and Fritz Strassrnann, working in Berlin and following up the work of Fermi and co-workers. bombarded solutions of uranium salts with such thermal neutrons. They found that after the bombardment a number of new radionuclides were present. In 1939 one of the radionuclides produced in this way was positively identified. by repeated tests. as barium. But how. Hahn and Strassmann wondered. could this middle-mass element
(Z = 56) be produced by bombarding uranium (Z = 92) with neutrons? The puzzle was solved within a few weeks by Meitner and her nephew Otto Frisch. They suggested the mechanism by which a uranium nucleus. having absorbed
a thermal neutron. could split . with the release of energy. into two roughly equal parts, one of which might well be barium. Frisch named the process fission, Meitner’s central role in the discovery of fission was not fully recognized until recent historical research brought it to light. She did not share in the Nobel prize in chemistry that was awarded to Otto Hahn in 1944. However, both Hahn and Meitner have been honored by having elements named after them: hahnium (symbol Ha,  Z = 105) and meitnerium (symbol Mt, Z = 109).

A closer Look at fission

Figure 44-1 shows the distribution by mass number of the fragments produced when 235U is bombarded with thermal neutrons. The ‘most probable mass numbers, occurring in about 7% of the events. are centered around A = 95 and A = 140. Curiously. the “double-peaked” character of  is still not understood. In a typical 235U fission event. a 235U nucleus absorbs a thermal neutron. producing a compound nucleus 236U in a highly excited state. It is this nucleus that  actually undergoes fission. splitting into two fragments. These fragments-between them-rapidly emit two neutrons, leaving (in a typical case) J40Xe (Z = 54) and 94Sr (Z = 38) as fission fragments. Thus, the overall fission equation for this 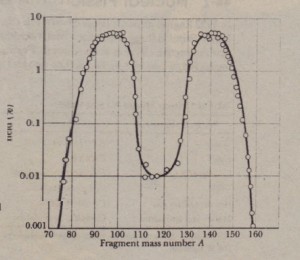 Note that during the formation and fission of the compound nucleus, there is conservation of the number of protons and of the number of neutrons involved in the process (and thus their total number and the net charge). In Eq. 44-1, the fragments I40Xe and 94Sr are both highly unstable, undergoing beta decay (with the conversion of a neutron to a proton and the emission of an electron and a neutrino) until each reaches a stable end product. For xenon, the decay
chain is

As we should expect from Section 43-5, the mass numbers (140 and 94) of the fragments remain unchanged during these beta-decay processes, and the atomic numbers (initially 54 and 38) increase by unity at each step. Inspection of the stability band on the nuclei did chart of Fig. 43-4 shows whether fission fragments are unstable. The nuclide 236U, which is the fissioning nucleus in the reaction of Eq. 44-1, has 92 protons and 236 – 92, or 144, neutrons, for a
neutron/proton ratio of about 1.6 T’·  agents formed immediately after the fission reaction have about this same neutron/proton ratio. However, stable nuclides in the middle-mass region have smaller neutron/proton ratios, in the range of 1.3 to 1.4. The primary fragments are thus neutron  rich (they have too many neutrons) and will eject a few neutrons, two in the case of the reaction of Eq. 44-1. The fragments that remain are still too neutron   rich to be stable. Beta decay offers a mechanism for getting rid of the excess neutrons-namely, by changing them into protons within the nucleus.  We can estimate the energy released by the fission of a high-mass nuclide by examining the total binding energy per nucleon I1Eben before and after the fission. The idea is that fission can occur because the total mass energy will decrease; that is, I1Eben will increase so that the products of the fission are more tightly bound.Thus, the energy Q released by the fission is 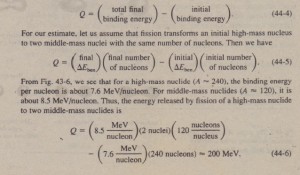 Find the disintegration energy Q for the fission event of Eq. 44-1, taking into account the decay of the fission fragments as displayed in Eqs. 44-2 and 44-3. Some needed atomic and particle masses are

SOLUTION: The KeyIdeas here are (I) that the disintegration energyQ is the energy transferred from mass energy to kinetic energy of the decay products, and (2) that Q = -tJ.m c2, where tJ.m is the change in mass. Because we are to include the decay of the fission fragments, we combine Eqs. 44-1, 44-2, and 44-3 to write the overall transformation as~J~u-+ I40Ce + 94Zr + n.

Only the single neutron appears here because the initiating neutron on the left side of Eq. 44-1 cancels one of the two neutrons on the