For large-scale energy release due to fission, one fission event must trigger others, so that the process spreads throughout the nuclear fuel like flame through a log. The fact that more neutrons are produced in fission than are consumed raises the possibility  of just such a chain reaction, with each  that is produced potentially triggering another fission. The reaction can be either rapid (as in a nuclear bomb) or controlled (as in a nuclear reactor).  Suppose that we wish to design a reactor based on the fission of Uby thermal electrons. Natural uranium contains 0.7% of this isotope, the remaining 99.3% being2:18U.which is not fissionable by thermal neutrons. Let us give ourselves an edge by artificially /’1 ‘II~ the uranium fuel so that it contains perhaps 3% 235U.Three  difficulties  10 the way of a working reactor. 1. The Neutron Leakage Problem. Some of the neutrons produced by fission will  leak out of the reactor and so not be part of the chain reaction. Leakage is a surface effect; its magnitude is proportional to the square of a typical reactor dimension (the surface area of a cube of edge length a is 6a2). Neutron production, however, occurs throughout the volume of the fuel and is thus proportional to the cube of a typical dimension (the volume of the same cube is a3). We can make the fraction of neutrons lost by leakage as small as we wish by making the reactor core large enough. thereby reducing the surface-to-volume ratio (= 6/a  for a cube).

2. The Neutron Energy Problem. The neutrons produced by fission are fast. with kinetic energies of about 2 MeV. However, fission is induced most effectively by thermal neutrons. The fast neutrons can be slowed down by mixing the uranium fuel with a substance-called a moderator-that has two properties: It is effective in slowing down neutrons via elastic collisions, and it does not remove neutrons from the core by absorbing them so that they do not result in fission. Most power reactors in North America use water as a moderator; the hydrogen nuclei (protons) in the water are the effective component. We saw in Chapter 10 that, if a moving particle has a head-on elastic collision with a stationary particle,  the moving particle loses all its kinetic energy if the two particles have the same mass. Thus, protons form an effective moderator because they have approximately the same mass as the fast neutrons whose speed we wish to reduce.

3. The Neutron Capture Problem. As the fast (2 MeV) neutrons generated by fission are slowed down in the moderator to thermal energies (about 0.04 eV), they must pass through a critical energy interval (from I to 100 eV) in which they are particularly susceptible to non fission capture by 238U nuclei. Such resonance capture. which results in the emission of a gamma ray, removes the neutron from the fission chain. To minimize such nonfission capture, the uranium fuel and the moderator are not intimately mixed but are “clumped together,” occupying different  regions of the reactor volume.In a typical reactor, the uranium fuel is in the form of uranium oxide pellets,
which are inserted end to end into long   ollow metal tubes. The liquid moderator surrounds bundles of these fuel rods, forming the reactor core. This geometric arrangement increases the probability that a fast neutron, produced in a fuel rod, will find itself in the moderator when it passes through the critical energy interval. Once the neutron has reached thermal energies, it may still be captured in ways hat do not result in fission (called thermal capture). However, it is much more likely that the thermal neutron will wander back into a fuel rod and produce a fission even 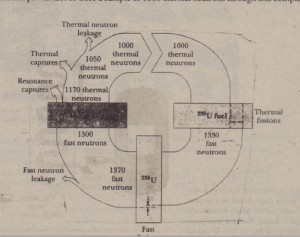 cycle, or generation, in the reactor core. They produce 1330 neutrons by fission in the mU fuel and 40 neutrons by fast fission in 238U, ‘which gives 370 neutrons more than the original 1000, all of them fast. When the reactor is operating at a steady power level, exactly the same number of neutrons (370) is then lost by leakage from the core and by nonfission capture, leaving 1000 thermal neutrons to start the next generation. In this cycle, of course, each of the 370 neutrons produced by fission events represents a deposit of energy in the reactor core, heating up the core.  The multiplication factor k-an important reactor parameter-is the ratio of the number of neutrons present at the beginning of a particular generation to the number present at the beginning of the next generation. In Fig. 44-4, the multiplication factor is 1000/1000, or exactly unity. For k= I, the operation of the reactor is said to be exactly  critical. which is what e wish it to be for steady-power operation. Reactors are actually designed so that they are inherently supercritical  (k> I); the multiplication factor is then adjusted to critical operation (k = I) by inserting. control rods into the reactor core. These rods, containing a material such as corneum that absorbs neutrons readily, can be inserted to reduce the operating power level and withdrawn to increase the power level or to compensate  for the tendency of reactors to go subcritical as (neutron absorbing) fission products  build  up in the core during continued operation. If you pulled out one of the control rods rapidly, how fast would the reactor power level increase? This response time is controlled by the fascinating circumstance that a small fraction of the neutrons generated by fission do not escape promptly from the newly formed fission fragments but are emitted from these fragments later, as the fragments decay by beta emission. Of the 370 “new” neutrons produced in  for example. perhaps I~ delayed, being emitted from fragments following beta decays whose half-lives range from 0.2 to 55 s. These delayed neutrons are few in number, but they serve the essential purpose of slowing the reactor response time to match practical mechanical reaction times.  shows the broad outlines of an electric power plant based on a  pressurized- .•-•a•ter reactor (PWR), a type in common use in North America. In such 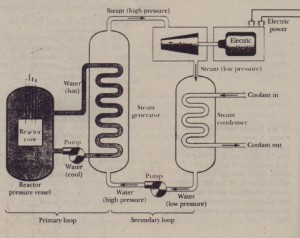 a reactor, water is used both as, the moderator and as the heat transfer medium. In he primary loop, water is circulated through the reactor vessel and transfers energy at high temperature’ and pressure (possibly 600 K and 150 atm) from the hot reactor core to the steam generator, which is part of the secondary loop. In the steam generator, evaporation provides high-pressure steam to operate the turbine that drives the electric generator. To complete the secondary loop, low-pressure steam from the turbine is cooled and condensed to water and forced back into the steam generator by a pump. To give some idea of scale, a typical reactor vessel for a 1000 MW  electric) plant may be 12 m high and weigh 4 MN. Water flows through the primary loop at a rate of about I ML/min. An unavoidable feature of reactor operation is the accumulation of radio time wastes, including both fission products and heavy transuranic nuclides such as plutonium and americium. One measure of their radioactivity is the rate at which they release energy in thermal form. shows the thermal power generated by such wastes from one year’s operation of a typical large nuclear plant. Note that both scales are logarithmic. Most “spent” fuel rods from power reactor operation are  stored on site, immersed in v.ater; permanent secure storage facilities for reactor waste have yet to be complet0d. Much-weapons-derived radioactive waste accumulated during World War II and in subsequent years is also still in on-site storage. For example,  shows an underground storage tank farm under construction at the Hanford Site in WashingtonState; each large tank holds I ML of highly radioactive liquid waste. There are now 152 such tanks at the site. In addition, much solid waste, both low-level radioactive waste (contaminated clothing, for example) and high-level waste (reactor cores from decommissioned nuclear submarines, for example) is buried in trenches.

A large electric generating station is powered by a pressurized water nuclear reactor. The thermal power produced in the reactor core is 3400 MW, and 1100 MW of electricity is generated by the station. The fuel charge is 8.60 X \04 kg of uranium, in the form of uranium oxide, distributed among 5.70 X \04 fuel rods. The uranium. is-enriched to 3.0% mU.

(a) What. is the station’s efficiency

The efficiency-as for all power plants-is controlled by the second law of thermodynamics. To run this plant, energy at the rate. of 3400 MW – 1100 MW, or 2300 MW, must be discharged as  thermal energy to the environment.