Pascal’s Principle and the Hydraulic Lever 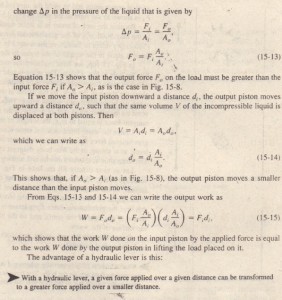 The product of force and distance remains unchanged so that the same work is done. However, there is often tremendous advantage in being able to exert the larger force. Most of us, for example, cannot lift an automobile directly but can with a hydraulic jack, even though we have to pump the handle farther than the automobile rises. In
this device, the displacement d, i   accomplished not in a single stroke but over a series of small strokes.