We use the term phase to describe a specific state of matter, such as a solid, liquid, or gas. The compound Hp exists in the solid phase as ice, in the liquid phase as water, and in the gaseous phase as steam. A transition from one phase to another is called a phase change or phase transition. For any given pressure a phase change takes place at a definite temperature, usually accompanied by absorption or emission of heat and a change of volume and density.

A familiar example of a phase change is the melting of ice. When we add heat to ice at Doc and normal atmospheric pressure, the temperature of the ice does not increase. Instead, some of it melts to form liquid water. If we add the heat slowly, to maintain the system very close to thermal equilibrium, the temperature remains at Do until all the ice is m elated. The effect of adding heat to this system is not to raise its temperature but to change its phase from solid to liquid.

For any given material at any given pressure the freezing temperature is the same as the melting temperature. At this unique temperature the liquid and solid phases (liquid water and ice, for example) can coexist in a condition called phase equilibrium.

Like melting, boiling is a reversible transition. When heat is removed from a gas at the boiling temperature, the gas returns to the liquid phase, or condenses, giving up to its surroundings the same quantity of heat (heat of vaporization) that was needed to vaporize it. At a given pressure the boiling and condensation temperatures are always the same; at this temperature the liquid and gaseous phases can coexist in phase equilibrium.

Both L; and the boiling temperature of a material depend on pressure. Water boils at a lower temperature (about 95°C) in Denver than in Pittsburgh because Denver is at higher elevation and the average atmospheric pressure is less. The heat of vaporization is somewhat greater at this lower pressure, about 2.27 x 106 J/kg.

Table 15-4 lists heats of fusion and vaporization for several materials and their melting and boiling temperatures at normal atmospheric pressure. Very few elements have melting temperatures in the vicinity of ordinary room temperatures; one of the few is the metal gallium, shown in Fig. 15-11. 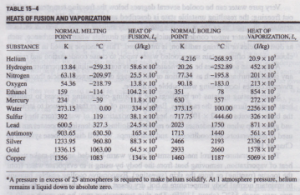 A substance can sometimes change directly from the solid to the gaseous phase. This process is called sublimation. and the solid is said to sublime. The corresponding heat is called the heat of sublimation. L,. Liquid carbon dioxide cannot exist at a pressure lower than about 5 x io’ Pa (about 5 atm), and “dry ice” (solid carbon dioxide) sublimes at atmospheric pressure. Sublimation of water from frozen food causes freezer bum. The reverse process, a phase change from gas to solid, occurs when frost forms on cold bodies such as refrigerator cooling coils. 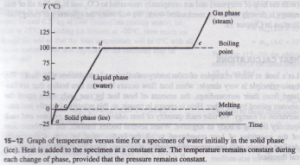 Very pure water can be cooled several degrees below the freezing temperature without freezing; the resulting unstable state is described as super cooled. When a small ice crystal is dropped in or the water is agitated, it crystallizes within a second or less. Super cooled water vapor condenses quickly into fog droplets when a disturbance, such as dust particles or ionizing radiation, is introduced. This principle is used in “seeding” clouds, which often contain super cooled water vapor, to cause condensation and rain A liquid can sometimes be super heated above its normal boiling temperature. Again, any small disturbance such as agitation or the passage of a charged particle through the material causes local boiling with bubble formation. Steam heating systems for buildings use a boiling-condensing process to transfer heat from the furnace to the radiators. Each kilogram of water that is turned to steam in the boiler absorbs over 2 x 106 J (the heat of vaporization L, of water) from the boiler and gives it up when it condenses in the radiators. Boiling-condensing processes are also used in refrigerators, air conditioners, and heat pumps. We will discuss these systems in Chapter 18

of vaporization, removing heat from the body by using it to evaporate water from the tongue (panting) or from the skin (sweating). Evaporation cooling enables humans to maintain normal body temperature in hot, dry desert climates where the air temperature may reach 55°C (about 130°F). The skin temperature may be as much as 30°C cooler than the surrounding air. Under these conditions a normal person may perspire several liters per day. Unless this lost water is replaced, dehydration, heat stroke, and death result. Old-time desert rats (such as one of the authors) state that in the desert, any canteen that holds less than a gallon should be viewed as a toy!

Evaporation cooling is also used to cool buildings in hot, dry climates and to condense and recirculate “used” steam in coal-fired or nuclear-powered electric generating- plants. That’s what is going on in the large, tapered concrete towers that you see at such plants.

Energy values of foods are defined similarly; the unit of food energy, although called a calorie, is a kilo calorie, equal to 1000 cal or 4186 J. When we say that a gram of peanut butter “contains 6 calories,” we mean that 6 of heat (6,000 cal or 25,000 1) is released when the carbon and hydrogen atoms in the peanut butter react with oxygen (with the help of enzymes) and are completely converted to CO2 and ~O. Not all of this energy is directly useful for mechanical work. We will study the efficiency of energy utilization in Chapter 18.