A circuit consisting of a battery B that is connected by wires, which we assume have negligible resistance, to an unspecified conducting device. The device might be a resistor, a storage battery (a rechargeable battery), a motor, or some other electrical device. The battery maintains a potential difference of magnitude V across its own terminals. and thus (because of the wires) across the terminals of the unspecified device, with a greater potential at terminal a of the device than at terminal h. Since there is an external conducting path between the two terminals of the battery, and since the potential differences setup by the battery are maintained, a steady current i is produced in the circuit, directed from terminal a to terminal h.  The amount of charge do that moves between those terminals in time interval it is equal to i dr. This charge dq moves through a decrease in potential of magnitude V, and thus its electric potential energy decreases in magnitude by the amount.

The principle of conservation of energy tells us that the decrease in electric potential energy from a to b is accompanied by a transfer of energy to some other.

form. The power P associated with that transfer is the rate of transfer which is

The course of an electron moving through a resistor at constant drift speed is  much like that of a stone falling through water at constant terminal speed. The average kinetic energy of the electron remains constant. and its lost electric potential  energy appears as thermal energy in the resistor and the surroundings. On a microscopicscale this energy transfer is due to collisions between the electron and the molecules of the resistor. which leads to ‘In increase in the temperature of the resistor lattice. The mechanical <energy thus than-feared to thermal energy is dissipated (lost).  because the transfer cannot be reversed.  For a r sister or some other device with resistance R. we can combine Eqs.27-8 (R = l’li\ and ~7-21 .to obtain. for the rate of electric energy dissipation due to a resistance. either

The Key Idea is that a current in a resistive material produces a transfer of mechanical energy to thermal energy; the rate of transfer (dissipation) is given by Eqs. 27-21 to 27-23. Because we know the potential V and resistance R. we use Eq. 27-23, which yields, for situation I 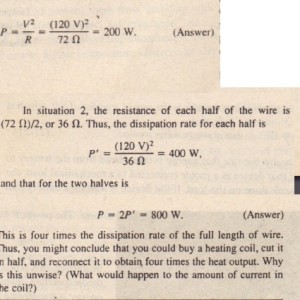