We prove  by first considering the simple situation . The rigid body there consists of a particle of mass m on one end of a mass less rod of length r. The rod can move only by rotating about its other end, around a rotation axis (an axle) that is perpendicular to the plane of the page. Thus, the particle can move only in a circular path that has the rotation axis at its center.

which we set out to prove. We can extend this equation to any rigid body rotating about a fixed axis, because any such body can always be analyzed as an assembly of single particles. 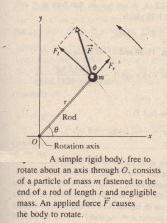 CHECKPOINT 7: The figure shows an overhead view of a meter stick that can pivot about  point indicated, which is to the left of the stick’s midpoint. Two horizontal forces, FI and 12′ are applied to the stick.