In 1964 Gell-Mann and George Zweig independently pointed out that the Either. Way patterns can be understood in a simple way if the mesons and the baryons are built up out of subunits that Gell-Mann called quarks. We deal first with three ef them, called the up quark (symbol u), the down quark (symbol d), and the streng« quark (symbols), and we assign to them the properties displayed in Table 45-5. (The names of the quarks, along with those assigned to three other quarks that we. shall meet later, have no meanings other than as convenient labels. Collectively, these names are called the quark flavors. We could just as well call them villa”a, chocolate, and strawberry instead of up, clown, and strange.) The fractional charge quantum numbers of the quarks may jar-you a little. However, withhold judgment until you see how neatly these fractional charges account for the observed integral charges of the mesons and the baryons. In all normal situations, whether here on Earth or in any astronomical process, quarks are always bound up together in twos or threes for reasons that are still not well understood. However, in 2000, certain accelerators were finally able to fire atoms into targets  with enough energy that the collision freed quarks from one another.We have seen how we can put atoms together by combining electrons and nuclei. Now let us see how we can put mesons and baryons together by combining quarks.As it turns out,

There is no known meson or baryon whose properties cannot be untIerste04 in terms of an appropriate combination of quarks. Conversely, there is no possible lurk desalination that does not correspond to an observed meson or baryon 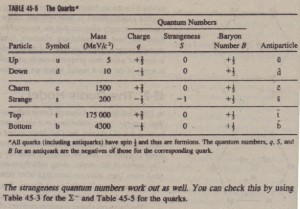 Mesons aR quark – antiquark pairs; some of their compositions are given in Fig. 45-5b. The quark-antiquark model is consistent with the fact that mesons are not baryons; that is, mesons have a ball)1Onnumber B = O. The baryon number for a quark is +I and for an antiquark is -t; thus. the combination of baryon numbers in a meson is zero.Consider the meson 17+, which  consists of an up quark u and an ant down quark d. We see from Table 45-5 that Ali charge quantum number of the up quark is +! and that of the anti-down quark is i (the sign is opposite that of the down quark). This adds nicely to a charge quantum number of + I for the 17+ meson; that is.

All the charge and strangeness quantum numbers of  agree with those of Table 45-4 and . Convince yourself that all possible up, down, and strange quark-antiquark combinations are used and that aU known spin-zero mesons are accounted for. Everything fits.