Most of the nuclides that have been identified are radioactive. A radioactive nuclide spontaneously emits a particle, transforming itself in the process into a different nuclide. occupying a different square on the nuclidic  hart. Radioactive decay provided the first evidence that the laws that govern the subito ic world are statistical. Consider, for example. a I mg sample of uranium metal. It contains 2.5 X IOI~ atoms of the very long-lived radionuclide 2l.U. The nuclei of these particular atoms have existed without decaying since they were created-well before the formation of our solar system. During any given second  only about 12 of the nuclei in our sample will happen to decay by emitting an alpha particle, transforming themselves into nuclei of 2l4Th. However,

There is absolutely no way to predict whether any given nucleus in a radioactive sample will be among the small number of nuclei that decay during the next second. All have the same chance.

Although we cannot predict which nuclei in a sample will decay, we can say .zhat if a sample contains N radioactive nuclei, then the rate (= -dNldt) at which nuclei will decay is proportional to N:

in which A, the disintegration constant (or decay constant) has a characteristic value for every radionuclide. Its SI unit is the inverse second (S-I). To find N as a function of time t, we first rearrange Eq. 43-10 as

and then integrate both sides, obtaining

Here No is the number of radioactive nuclei in the sample at some arbitrary initial time 10, Setting to = 0 and rearranging Eq, 43-12 give us.

in which No is the number of radioactive nuclei in the sample at I = 0 and N is the number remaining at any subsequent time t. Note that lightbulbs (for one example)  follow no such exponential decay law. If we life-test 1000 bulbs, we expect that they  will all “decay” (that is, bum out) at more or less the same time. The decay radionuclides follows quite a different law. We are often more interested in the decay rate R (= -dNldt) than in N itself.  Differentiating Eq. 43-14, we find

where R and the number of radioactive nuclei N that have not yet undergone decay must be evaluated at the same instant. .  The total decay rate R of a sample of one or more radionuclides is called the activity of that sample. The SI unit for activity is the becquerel, named for Henri Becquerel, the discoverer of radioactivity:

An older unit, the curie, is still in common use:

Here is an example using these units: “The activity of spent reactor fuel rod #5658 on January 15, 2000, was 3.5 X 1015 Bq (= 9.5 X 104 Ci).” Thus, on that day 3.5 X 1015 radioactive nuclei in the rod decayed each second. The identities of the  radionuclides in the fuel rod, their disintegration constants A, and the types of radiation they emit have no bearing on this measure of activity. Often a radioactive sample will be placed near a detector that, for reasons of  geometry or detector inefficiency, does not record all the disintegrations that occur in the sample. The reading of the detector under these circumstances is proportional to (and smaller than) the true activity of the sample. Such proportional activity measurements are reported not in becquerel units but simply in counts per unit time. There are two common time measures of how long any given type of radionuc1ides lasts. One measure is the half-life TI/~ of a radionuclide, which is the time at which both N and R have been reduced to one-half their initial values. The other measure is the mean life T, which is the time at which both N and R have been reduced to e:I of their initial values.  To relate TI/2 to the disintegration constant A, we put R = 4Ro in Eq. 43-15 and substitute TI!2 fort. We obtain 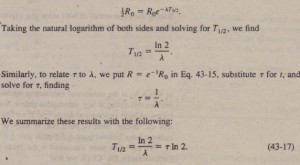