Radioactivity and the Nuclidic Chart

We can increase the information of the nuclidic chart of -4 by plotting the mass excess of each nuclide in a direction perpendicular to the N-Z plane. The mass excess of a nuclide is (in spite of its name) an energy that approximates the nuclide’s  total binding energy. It is defined as (m – A)c2, where m is the atomic mass of then nuclides and A is its mass number, both expressed in atomic mass units, and c2 is  931.5 MeV/u.The surface so formed gives a graphic representation of nuclear stability. (for the low mass nuclides), this surface describes a “valley of the 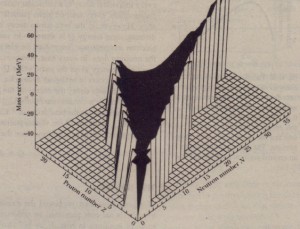 Nuclides. with the stability band  running along its bottom. Nuclides on the proton-rich side of the valley decay into it by emitting positrons, and those on the neutron-rich side do so by emitting electrons.

28~Udecays into 234Th by the emission of an alpha panicle. There follows a chain of further radioactive decays, either by alpha decay or by beta decay.  Eventually a stable nuclide is reached and after that. no further radioactive decay is possible.  Which of the following stable nuclides is the end product of the 238U radioactive de- chain: 206Pb, lO1Pb. 208Pb. or 209Pb’! (Hint: You can decide by considering the changes in mass number A for the two types of decay.)

SOLUTION: The Key Idea here is that the disintegration energy Q for the beta decay is the amount by which the mass energy is changed  b the decay. Q is given by Eq. 38-47 (Q = -tlM c2). However.because an individual electron is emitted (and not an electron bound up in an atom). we must be careful to distinguish between nuclear masses (which we do not know) and atomic masses (which we 90 know). Let the boldface symbol mp and ms represent the
nuclear masses of .\2p and J2S. and let the italic symbols mp and ms represent their atomic masses. Then we can write the change in  mass for the decay of Eq. 43-23 as.

in which m; is the mass of the electron. If we add and subtract 15m. on the right side of this equation. we obtain

The quantities in parentheses are the atomic masses of 32S and J~p, so

We thus see that if we subtract only the atomic masses. the mass of the emitted electron is automatically taken into account. (This procedure will not work for positron emission.) The disintegration energy for the J2p decay is then

Experimentally, this calculated quantity proves to be equal to Kmu. the maximum energy the emitted electrons can have. Although 1.71 MeV is released every time a 32p nucleus decays, in essentially every case the electron carries away less energy than   this. The neutrino gets all the rest, carrying it stealthily out of the laboratory.

Nuclei are more complicated than atoms. For atoms, the basic force law (Coulomb’s law) is simple in form and there is a natural force center, the nucleus. For nuclei the force law is complicated and can not, in fact, be written down explicitly in full detail.FurtJtorance,   the nucleus-burnable of protons and neutrons-has no natural force center to simplify the calculations.In the absence. of a comprehensive nuclear theory, we turn to the construction of nuclear models. A nuclear model is simply a way of looking at the nucleus that gives a physical insight into as wide a range of its properties as possible. The usefulness of a model is tested by its ability to provide predictions that 08Il be verified experimentally in the I~.Two models of the n~leus have proved useful. Although based on assumptions that seem flatly to exclude each other, each accounts very well for a selected groupof nuclear propentes. After describing them separately, we shall see how these models may be combined to form a single coherent picture of the atomic nucleus.

within the ~ at random, are imagined to interact strongly with each other, like the moIecuIes1n a drop of liquid. A given nucleon collides frequently with other DUCIeonS ill the nuclear interior, its mean free path as it moves about being substantially less than the nuclear ‘radius. ‘The collective model permits us to correlate many facts about nuclear masses and binding energies; it is useful (as you will see later) in explaining nuclear fission. It is also useful for understanding a large class of nuclear reactions. Consider, .for exa.mple, a :eneraJized nuclear reaction of the form.

We ‘imagine that projectile a enters target nucleus X, forming a compound nucleus C and conveying to it a certain amount of excitation energy. The projectile, perhaps  a neutron, is at once caught up by the random motions that characterize the nuclear interior. It quickly loses its identity-so to spealc-and the excitation energy it carried into the nucleus is quickly shared with all the other nucleons in C. . ‘The quasi-stable state represented by C in Eq. 43-33 may halfe a mean life of to-16s before it decays to Yand b. By nuclear standards, this is a very long time, being about one million times longer than the time required for a nucleon with a  few million electron-volts of energy to travel across a nucleus. _  The central feature of this compound-nucleus concept is that the formation of the comr,d nucleus and its eventual decay are totally independent events. At the  time of Its decay, the compound nucleus has “forgotten” how it was formed. Hence,  its mode of decay is not influenced by its mode of formation. As an example, Fig.  43-13 shows three possible ways in which the compound nucleus 2°Ne might be formed and three in which it might decay. Any of the three formation modes can  lead to any of the three decay modes