Rolling down a Ramp

Down a ramp at angle 8, along an,r axis. We want to find expressions for the body’s acceleration acorn.x down the ramp. We do this by using Newton’s second law in
both it linear version (Fnel = Ma) and its angular version (Tnel = /01). We start by drawing the forces on the body.

1. The gravitational force 18 on the body is directed downward. The tail of the vector is placed at the center of mass of the body. The component along the ramp is FR sin 8, which is equal to Mg sin 8.

2. A normal force jij is perpendicular to the ramp. It acts at the point of contact P. but in Fig. 12-7 the vector has been shifted along its direction until its tail is at the body’s center of mass.
3. A static frictional force 7. acts at the point of contact P and is directed up the ramp. (Do you see why? If the body were to slide at P, it would slide down the ramp. Thus, the frictional force opposing the sliding must be Lip the ramp.).

We now wish to apply Newton’s second law in’ angular form to the body’s rotation about its center of.mass. First, we shall use to write the torques on the body about that point. The frictional force 7, has moment arm R and thus produces a torque Rf, which posit because it tends to rotate the body counterclockwise. 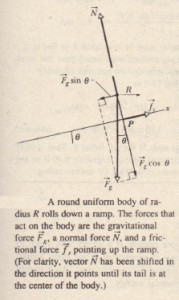