A firecracker placed inside a coconut of mass M. initially at rest on a friction less floor. blows the coconut into three pieces that slide across the floor. An overhead view is shown in Fig. 9-1Oa. Piece C. with mass O.30M. has final speed tc = 5.0 m

A second Key Idea is that linear momentum is conserved separately along both x and y axes. Let’s use the y axis and write

SOLUTION . Because linear momentum is also conserved along the axis,

we find the x components of the final momenta, using the fact that , piece A must have a mass . 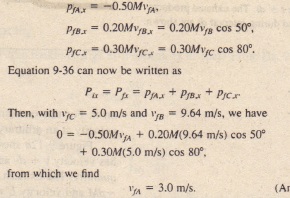 CHECKPOINT 6: Suppose that the exploding coconut is ac- SOLUTION . Because linear momentum is also conserved along the x celebrating in the negative direction (say It IS on axis, we have  a ramp that slants downward In that direction). Is linear men tum conserved along (a) the .r axis (as stated in ) and’here Pi, = 0 because the coconut is initially at rest. To get PI” (b) the y axis (as stated)?